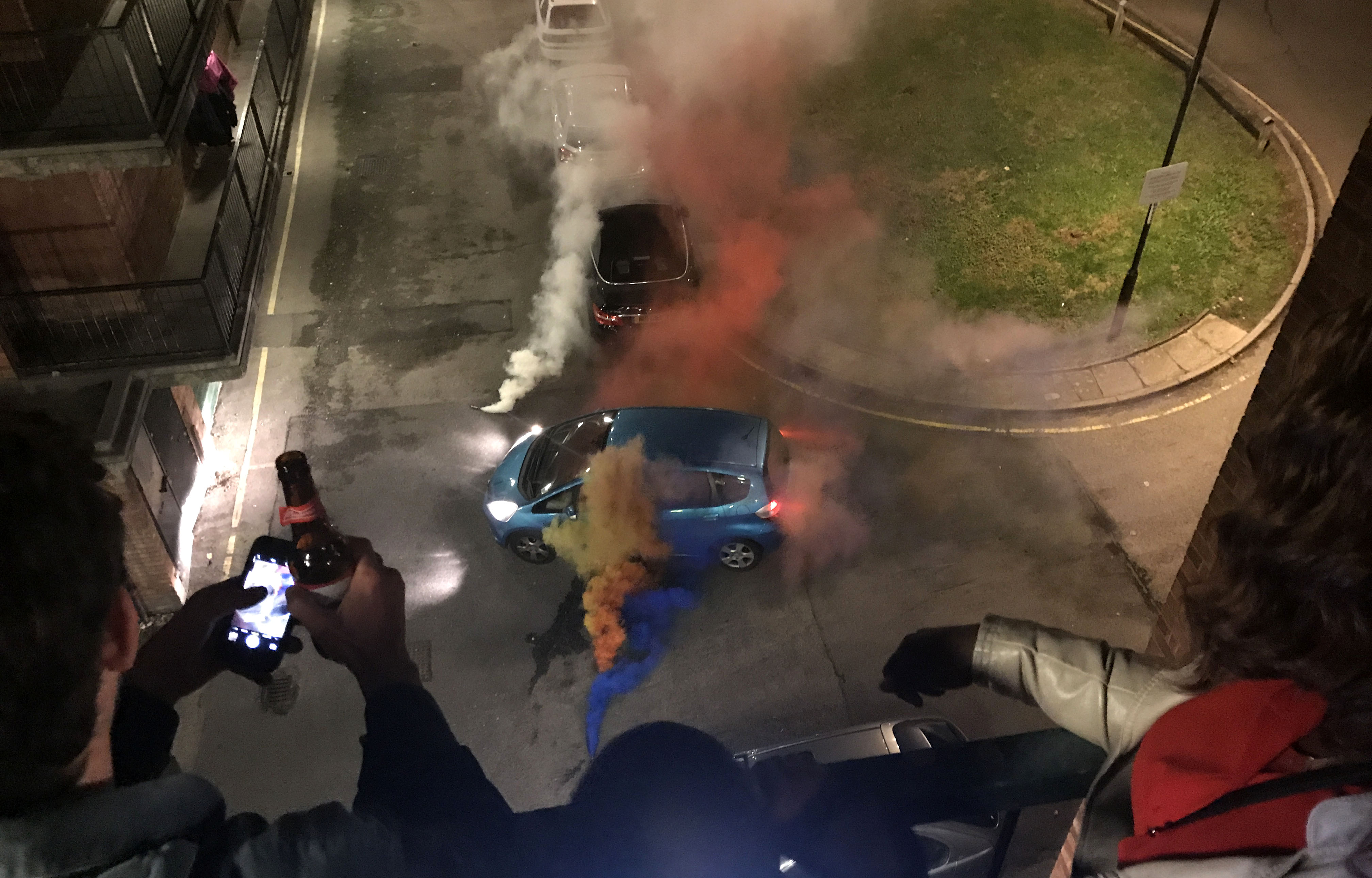 A car’s headlights are left on as it sits in the middle of the estate filling and billowing with red smoke. Operatic score projects from the top floor walkway.

We’ve just witnessed Bede House Estate momentarily become a sticky web of irrepressible expulsions and venture capital rhetoric emanating from Philip Ewe, as he frantically performs ‘don’t shoot the messenger (II)’, moving from playground to balcony, before driving away in the smoke engulfed car, as we stand huddled on the top floor of an adjacent flat. I’ve written about Ewe before, but feel urged to again, there’s something greatly unnerving, yet comically absurd being in his presence. Here, the pleasure in watching Ewe from afar yet remaining privy to his sporadic monologues (and dialogues), as he parades climbing frames and outside people’s flats several yards away, is due to his mic’d body relayed through a speaker system. It makes for uncanny viewing, as we listen in on his live phone conversation to a hotel receptionist, who struggles to handle Ewe’s request for “an outhouse, where he can delve his fingers in and touch some pretty exclusive organs.” Animating the theatric potential of the estate, “Romeo o’ Romeo!” blurts Ewe from a balcony at one moment, local residents come out their doors wondering why 5 coloured flares are occluding the driveway. The community was apparently informed in advance, with invitation to the host domestic gallery Bede House and ‘Capital I’, which features other print and audio works by Ewe. One resident flies his drone over the proceedings, harmonizing with the unsettling action.

Ewe’s interests seem to have progressed from audience subjection to provocateur, a middle-man in turn exploiting the inter-zone of exchange with property developers, estate agents or private suite hires, now between audience and subject. Yes it feels like a joke on them, the recipient end of the phone call, but like the other elements of Ewe’s performance work, speculates on the potential of subjective breakdown, technical failure, confrontation or noncooperation. “So we’re all under construction…it’s loose, it’s messy but it’s permanent. You’re under that sun, we’re all getting colour, but we’re not getting skin grafts”, visions Ewe, “…no, we’re not getting skin grafts”, replies the agent. By toying with the abstracted industry lingo and mirroring it back at client reps, the joke opens up a territory fearful of miscommunication and fearful of money and deals being lost. Quoting Lauren Velvick in her forthcoming essay 'Modes of Ownership in Art and Housing' “…when it seems like there is no way to diminish a complex but unjust system, developing the language to describe it can be the first step, or at least feels worthwhile” (Doggerland Journal #4). Beyond the initial humour, the nature and politics of capital rhetoric are laid bare, what Ewe describes as “changeable, unreliable and malleable material”, to which ends are left to be questioned, undoubtedly amongst those Ewe employs and coerces into exchange, but also passer-bys and audiences, who recount the spectacular confusion of it all. “If I rub my hand along the wall, how much friction will there be?” questions Ewe to an estate agent. More and more, it feels.