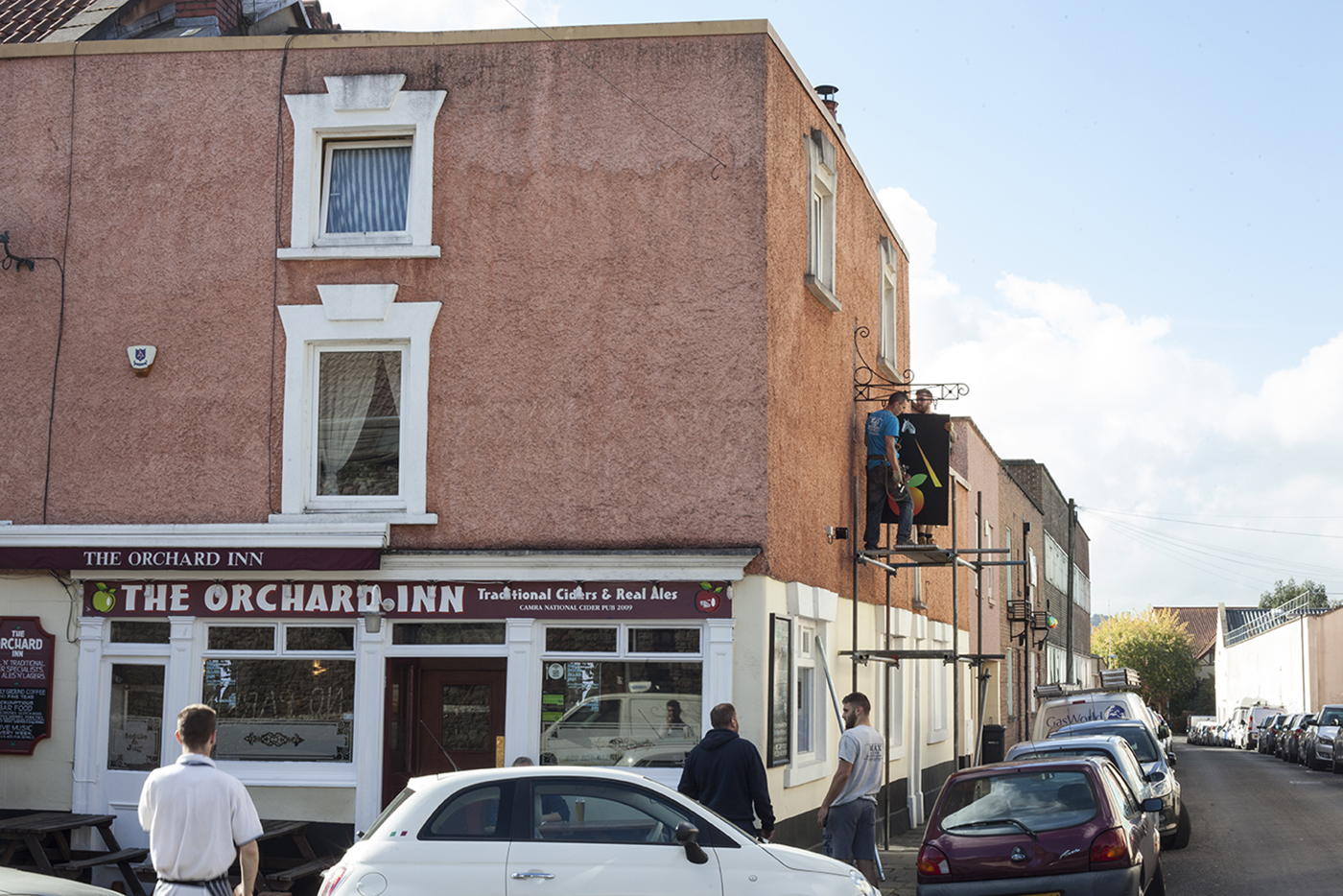 STUDIO 36, Bristol // School of the Damned

Anna Clawson and Nicole Ward, Bristol-based artists who work collaboratively, started talking about the idea back in 2012 as a response both to MFA programs general resistance to collaborative applications, and the addition of their fees. They could work together during the course, they were informed, but the recurrent curriculum of UK art schools required students to be assessed and enrolled individually, regardless of collaborative or collective practice. And so STUDIO36 was born, a residency project palimpsestically inhabiting their shared studio at Spike Island, in Bristol.

Clawson: We thought if we could create our own residency series then we could talk to people casually about work, have a chance to meet new people and learn from them and their working methods.

Ward: And at the same time help bring fresh faces to Bristol.

C: It was set-up so that residents would arrive, be given a set of keys, and sleep in our room, and we’d then take the living room. We also gave everyone we knew their telephone number and email, so that our friends knew who was coming. Because it was a week and they were living with us, this broke barriers down straight away. After a couple of days of living together and seeing them in their pyjamas, any initial uptightness would disappear.

This central desire for communication, centred on art practice and the dot-joining of both guest and host networks, although ostensibly a standard feature of most residencies, in fact feels relatively rare. Philip Owen (who, as well as working at the Arnolfini, runs Tertulia and is a collaborator within HO-ST - on whom more later) recently coined the term ‘radical generosity’, and it feels a highly suitable fit in this context. Offering their studio, their bed and home, and their social network out to visiting artists, in the cause of the vicarious injection of energy, has numerable ‘real’ benefits for both themselves and all involved, whilst always working within their means. It’s worth noting that if Clawson and Ward were not around, the resident artist would afford the opportunity for other artists and networks to also host and in doing so spend time together as well.

Undertaking six residencies, over seven months, gave Clawson and Ward time and space for themselves as well. Each resident artist paid their own travel (the furthest flying from Rome), so the only outlay for the pair was the general costs of hospitality, and dismantling their studio in preparation for each artist.

C: The first time we hosted an artist, we had to lug everything in the studio back to our flat using a trolley in order to clear it out. So now everything in there is on wheels, and mobile.

Following this series of residencies, an exchange was undertaken with home.alonE, an exhibition and film club program run by Bruno Silva and Romane Domas, from their flat in Clermont-Ferrand in France. Both getting off and on the same planes, Clawson and Ward, and Silva and Domas never met, spying each other briefly through the airport’s glass partition. This aspect of exchange thus added an angle of reciprocity to the residencies, which they have since formalised, and visualised, as KITE. Although still in its infancy (they recently added 38b, in London, to the map), the project’s aim is to create a network of spaces and projects open to such house/studio swaps, and as a result be a means of facilitating these, through eventually amassing a list of spaces and people open to such exchanges.

W: We’ve been in touch with a few potential hosts, but it’s been quite difficult to convince them to join, they tend to clam up at the thought of commitment. Sometimes this is because their space is in a rented property and they aren’t sure how an exchange could work with this. So we are continually emphasising that it’s not this huge commitment, that it’s flexible and just a window into the potential for exchange.

C: We’ve tried to be as open as possible with people because of this. I mean, giving up your space is a difficult thing, requiring trust, so we’re trying to get people to join the website, and then we can initiate some exchanges from there. As a platform I think it’s potentially pretty interesting, as an opportunity for finding out about each space’s community; for example, how it interacts with the art schools locally, whether students stay around after uni, its relationship with cafes/bars locally, etc. I think people are fearful of something so simple though. It’s difficult in the arts, we’re taught to be a certain way, to be cautious, but people need to learn to be more open. 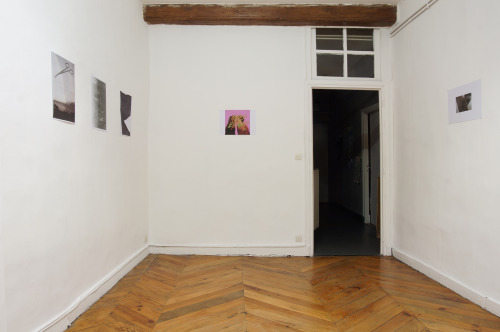 Following the model of their STUDIO36 residencies, Silva and Domas’ contact details were given out to a collection of Bristol-based practitioners, with a recent show ‘Hard Copy’ having taken place at home.alonE, featuring work from those they met whilst in Bristol.

C: They have a printer at their space, so we invited everyone to design a print, up to A3.

W: A cost-effective show, as all they had to do was send us a file each and then Bruno and Romane would simply click ‘print’ from across the water.

In a similar manner, teasing further work and exchanges from the interactions they instigated with the residencies, a mobile poster display-rack featuring images made during the six residencies was presented at The Royal Standard, Tenderbooks, and Tate St Ives, distributing these artists work, and the labour of the residency program itself, further. In place of the artists themselves, it is the work which was here used as a vehicle for exchange.

C: We gave each resident a disposable camera whilst they were here, and then selected images from these which became the poster-rack. This then meant we could create little events around it, developing new ecologies from it. The images are the sort you’d expect, blurry images from when people have been drunk, or out at a club, and images that didn’t come out properly, and then beautiful images of trees, or broken bits of cars, just stuff that’s around, like a shit version of Instagram.

W: And then that was a nice excuse to make contact with different spaces to ask if we could squeeze it into their program.

C: It’s just an excuse to talk really. We gave the posters away for free so that they didn’t go to waste, and to show off the artists that we’d worked with. And we also had some wall-space as part of the event at Tenderbooks, so we asked if any of the artists wanted to show some work alongside the rack.

More recently, the duo organised a show at The Orchard pub - a site as important as any gallery or project space in Bristol for the visual-arts community (as both employer and watering-hole, situated about 400 yards from the front entrance to Spike Island, and a stone’s-throw from the former Bristol Diving School site) - where a similar kind of motivation emerged. Having contemplated the pub’s potential for quite some time and wanting to do something to coincide with the preview night for the Charlotte Prodger exhibition (opening at Spike Island at that time), Clawson and Ward immediately thought of the pub and Harriet Bowman - a fellow Spike studio-holder, and artist featured in the exhibition who was employed at the pub - mentioned that the landlord was open to doing something.

The show’s premise was to transpose objects from the pub with objects made by participating artists - a tactful pervasivity without encroaching on the pub’s environs, too much. ‘Mates Rates’, unusually, featured only Bristol-based artists - Lucie Akerman, Harriet Bowman, Clawson and Ward, Libita Clayton, Beth Collar, Bryony Gillard, Toby Huddlestone, James Parkinson, Laura Phillips, Oliver Sutherland and Sarah Wilton - providing a rare opportunity outside of studio ‘open days’ to see something of these respective practitioners work. It is precisely this opening-out and platforming of private endeavours that is so essential to the development of a city’s cultural ecology, allowing people to get to know each other, and one another’s work. Apparently bringing in an extra £1000 to the pub’s takings on the opening night, again, the exchange went both ways. 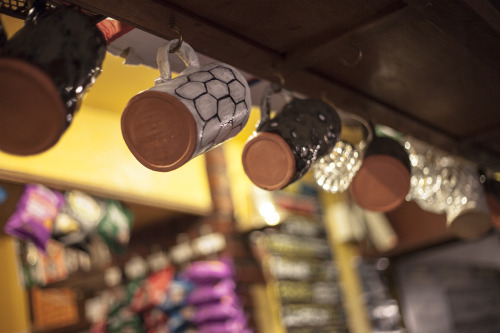 Tankards by Beth Collar, as part of Mates Rates, Bristol

Unfortunately, though perhaps unsurprisingly, there were casualties from the meeting of these two communities, between the ‘regulars’ and participating artists, with one work being turned around to face the wall, and another, sited in the urinals, being damaged.

C: It wasn’t meant to be an invasion, so we were a little disappointed that some of the regulars didn’t like it.

However, at the very least it brought together a community of practitioners already living in close-proximity.

C: We’re creating groups, and that’s exciting. You can see people hanging out that didn’t before. There are lots of very talented people, but I think a lot of us have been looking outwards instead of noticing what’s here. For a long time, everyone seemed to be trying to leave. Although house prices aren’t hugely different from London, one thing that we do have is low studio prices. I think it’s changing though, people are fed up of waiting.

For a long time, this lack of desire to present work in Bristol certainly felt discernible, possibly in part from a dearth of ‘credible’ platforms within the city in which to show work. There are many reasons for why this might have been the case, not least because Bristol City Council stopped all new applications for Business Rates Relief in 2012, making it utterly unviable for not-for-profit creative projects to rent empty properties, irrespective of ‘peppercorn’ rents being potentially offered by the properties owner. In this context, Clawson and Ward’s time-share-esq use of their studio doubling up as a residency space and exchange program starts to look like an incredibly resourceful means for continuing the work of cultural production.

This notion of ‘waiting’ is also interesting, however, it becomes a difficult knot to untangle. In the context of Business Rates Relief disappearing on a wide-scale, at times it feels almost impossible to see how independent activity can have the space to thrive. Recently though, it does feel like things are shifting, with studio-centred projects like BEEF (film-focussed studios with a wide range of screenings, workshops and exhibitions, who we will be featuring on shortly) or Champ (who function as both a performance collective, studio space and event producers) feeling like they now have a degree of stability and longevity. Whilst HO-ST (who perform ad-hoc parties-cum-exhibitions funded through ticket sales), the recently opened Perennial (another project using an unused area, the basement, of a residential property), and East Bristol Contemporary (situated within, and presumably in some way supported by, the music-venue The Trinity Centre, and who recently opened their first show at the beginning of February) are all adding to the city’s general visual-culture landscape. Reassuringly, it appears people are finding ways through irrespective.

W: We kind of feel like we’re pushed into a corner, yes it’s difficult to find buildings, but finding ways around this and D.I.Y. is better than not doing anything. Although it’ll be a while before we give up our studio again, we’re quite attached to it now.

Anna Clawson and Nicole Ward are part of the upcoming exhibition, ‘Scissors Cut Paper Wrap Stone’, at the CCA, Derry-Londonderry, opening 24th March. They will also be commencing School of the Damned at the end of February.