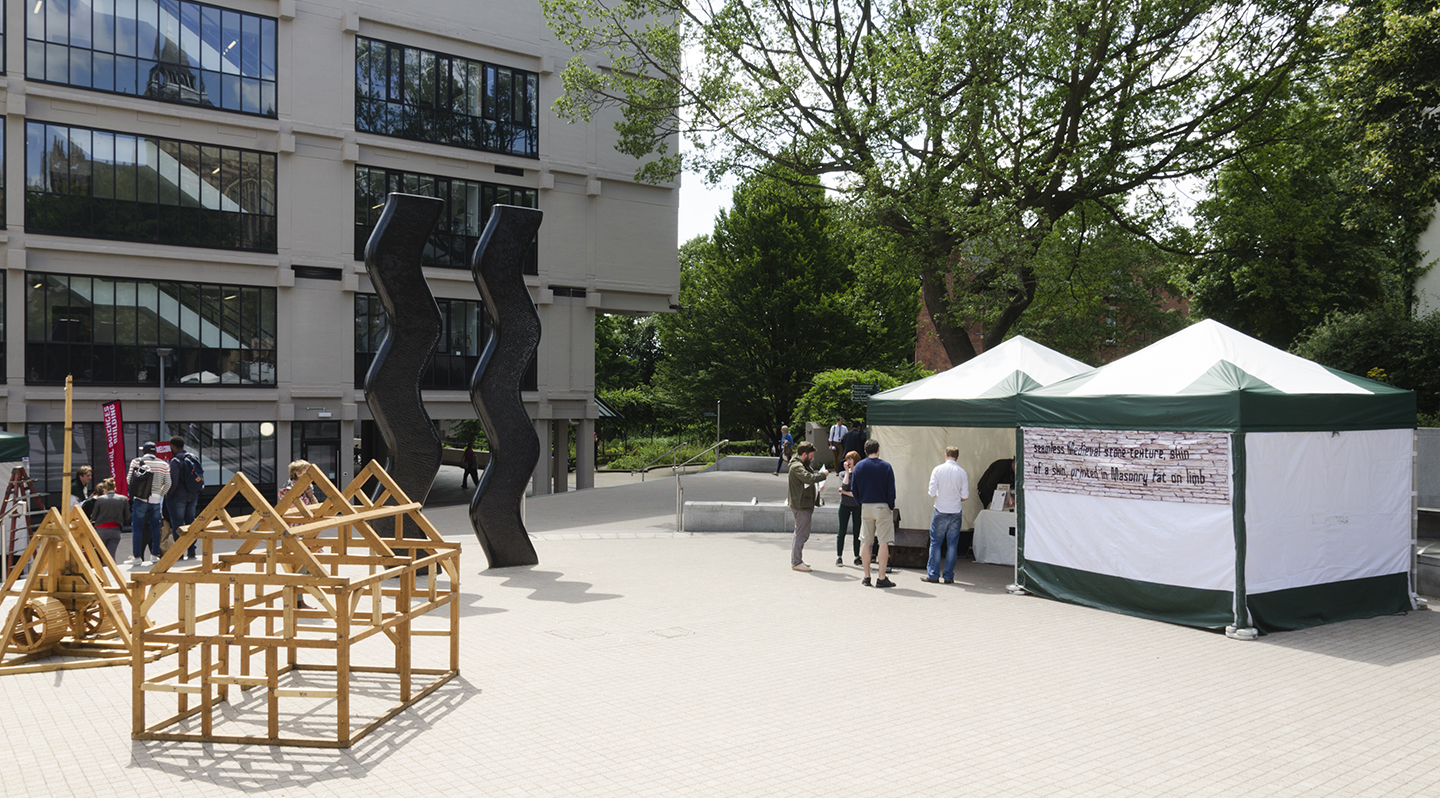 The project is described as ’Challenging a simplistic view of the broad period known as the ‘Dark Ages’, [Medieval helpdesk] considers how the medieval functions as a rich storehouse of ideas, aesthetic forms and processes that continue to inform the production of art and its terms of engagement. Highlighting the reuse and appropriation of elements from the past, Medieval helpdesk explores the currency of the medieval to the wider cultural imaginary. It takes its name from a sketch in the Norwegian comedy programme Øystein og meg (1997 - 2001) in which the relativity of knowledge and ‘newness’ is sent up.’

The first public manifestation of the project took the form of a one-day exhibition in a gazebo, as part of Leeds International Medieval Congress 2015. The following conversation looks at how the exhibition was constructed around the ideas of the medieval, between Lara, David, and one of the exhibiting artists - Kitty Clark

Lara Eggleton: In your piece, Drag Me to Hell, Bring Me to Life, which you made for our co-curated exhibition Medieval helpdesk, you touch on some sensitive historical themes, particularly the imprisonment and torture of witches. Can you tell us a bit more about how the work functions, and your ideas behind it?

Kitty Clark: Much of my work leading up to this piece has been driven by a fascination with representations of (and perhaps attempts to deal with) matters of death and spirituality, particularly where they occur in mainstream / popular culture – e.g. haunted house attractions at theme parks, horror movies, the Halloween section in pound shops, etc. Previous works use devices picked up from these sources, utilising scents and animatronics in works that often take the form of tombstone-like sculptures. In this context, I saw witches as simply one of many cartoon Halloween archetypes, yet over time I have found myself coming back to the witch character on a more personal level.

The title of the work comprises two antithetical sentiments (taken respectively from a 2009 US horror film and a popular song by Evanescence) that have become a mantra or coping mechanism for desperation. I wanted to look at the self-identified contemporary young witch, to understand her desire to reclaim and re-imagine this historically maligned identity as a means of self-empowerment (see, for example, this article that describes ‘How to Embrace Your Inner Witch’).

David Steans: One aspect of the piece that I found interesting was the fact of its supposed length. Or rather, your presentation of that fact. Who wants to listen to ten hours of simulated witch torture?

KC: Yes, the duration of the work is important. I made the short loop of sound for the piece by layering many multiple tracks of synthetic church organ, sped it up until it was anxiously disordered, layered it again with a crackling fire sound effect and then made a playlist where I copied it over and over again until it reached 10 hours. At the time I was watching a lot of YouTube videos that are 10 hour long loops of small moments in songs or movies (e.g. Blink 182 - I Miss You [Tom’s Verse 10 Hour Loop]), sometimes massively slowed down or sped up. There is something about the belligerence of making or uploading such a video that is obviously never going to be consumed at that length, or if it was it would itself be a form of torture.

LE: Drag Me to Hell, Bring Me to Life is unsettling in its disembodied fleshiness and jaunty quiff (reminiscent of dolls or androids), and intimately interactive (iPod earphones dangling). It requires a physical encounter, an insertion, that plugs the viewer into a deeper sound experience, which itself presented layers of ambiguity. Rattling chains, church organs, crackling fire… distorted, digitally rendered… both real and self-consciously fabricated. 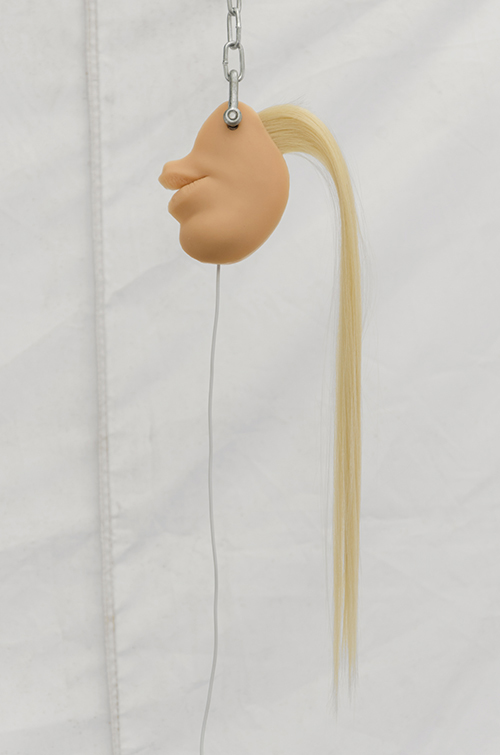 DS: In the end the sound element was abstract, not graphic, but nonetheless disturbing. Sometimes I think the fact of a depiction can be as effective as the depiction itself. We’ve talked about the mythology of the ‘snuff’ film before, and also torture porn. I don’t have much of an appetite - or stomach - for prolonged and extreme images of violence and cruelty, but have a compulsion to find out about them, what occurs in them. Or am I just a prurient liar? In Grizzly Man, where Herzog solemnly announces his decision not to use the sound recording of Timothy Treadwell’s death - but he films himself listening to it. Where’s the line? When questioned about it, he said “I’m not making a snuff film”. He was compelled to justify his non-use of the material. Kitty I know you’re a big fan of the Saw franchise - though I suspect maybe it’s the elaborate, diabolical aspect of them that interests you as much as the torture aspect? Like Cube, or Dr. Phibes.

KC: I have seen almost all of the Saw movies in the cinema, and almost every time I realise I have forgotten how horrible the experience is until I am there doing it again. Because it has become an unholy tradition to attend each new sequel, somehow the appeal of that ritual overpowers the reality of actually watching them.

DS: Though what we’re talking about here is fiction, representation, the witch theme in the context of the IMC is very sensitive. Lara, you initially had some concerns about the work, didn’t you?

LE: I suppose the risk was that visitors would miss the nuance of Kitty’s work, or misread its tone as flippant or disinterested. Scholars of the medieval period approach themes such as witch hunting and prosecution contextually and critically - which is not to say that you wouldn’t Kitty - only that your framing of this phenomenon in artistic or conceptual terms is quite different; you use a different kind of conceptual language.

KC: I totally understand your reservations - I actually had them myself too, because I am quite aware that my work can come across as maybe slightly glib sometimes… It’s a problem for me because I really care about the subject matter I’m working with, particularly in this work.

LE: It was a useful thought experiment, actually. How do artists and academics approach history differently? What are their respective tools for understanding and representing horror and violence?

DS: Maybe there’s some value in artists having the license to not be historically ‘authentic’ (imagining such a thing were possible)?

KC: I think there’s a lot to be gained by including contemporary art in events such as the IMC, to encourage interaction between these different worlds. The potential that the work would be seen by academics who specialise in witch hunting and prosecution, particularly in a feminist context, was exciting to me as I was very curious to see how they might interact with the work. 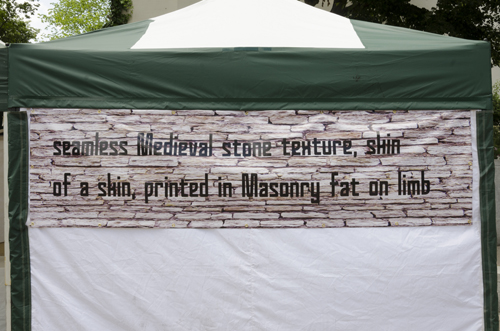 DS: The exhibition at the IMC was something of an experiment. I don’t think Lara or I really knew how it would be received or understood, which was part of the point and the fun.

LE: Yes, and Medieval helpdesk was the first contemporary art event at the IMC, and we weren’t sure how it would be received alongside other stalls presenting medieval wares, produce and displays (with falconry, jousting and catapults competing for attention!). Passers-by could tell at a glance what these stalls had to offer - commercial, recreational or educational - whereas our gazebo was a bit of a mystery, even for those who ventured inside and spoke with us about the project (on one occasion someone mistook Joey Lewis’ church-shaped hurdy-gurdy as a medieval object proper, despite its electric foot pedal). 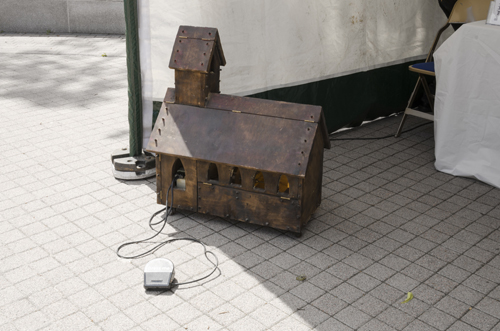 DS: I liked how odd the exhibition was, or at least seemed to appear to many visitors.

KC: I think that my work did come across as more threatening than I intended - the physical component of it was really supposed to be quite soft and tactile in contrast to the violence and chaotic nature of the mp3 sound contained inside, but perhaps it was the interaction involved that caused some people to back away from it. I also enjoyed the oddness of the gazebo, but in its outward similarity to the ones around it there seemed to be an awkward precedent for the contents inside to be experienced in a way that was actually very different from what the artworks demanded, and what was expected by the attendees.

LE: I agree, I think the art sat awkwardly within the congress, partly because most of the other gazebos were interactive in a different sort of way. Delegates mainly encountered activities or objects they understood as specialists or at least at a light entertainment level. Even though most of the works in our exhibition were participatory in some way (we had a live anchorite under a table for part of the day), the layers of interpretation and ironic distance that most works require - the deferred or ‘once removed’ meaning that is so integral to post conceptual art, definitely presented a barrier to some.

DS: I think in the future it’d be good to try something a bit more legible in the context of the academic congress, the craft fair, the demonstrations. We were quite lucky, being situated where we were adjacent to the medievalist carpentry demonstrators. Some of their energy and industry rubbed off on our gazebo I think! It’d be great to do something demonstrative like that, an active, performative display, but perhaps with some esoteric, or poetic, or critical purpose instead of a purely informative, or educational one. Or, why not both?


Lara Eggleton is the author of Folly Matters and based in Leeds.

David Steans is an artist based in Leeds.

Future manifestations of Medieval helpdesk potentially include written fiction and artworks, alongside curated exhibitions and projects, publications and symposia. Though it hopes to contribute to research in this particular area of interest within contemporary art, Medieval helpdesk does not aim to survey it, considering itself as something primarily generative.

All images courtesy of Harry Meadley.