Nestled into a square featuring derelict buildings, corporate solicitor offices, an old church used as a circus, and a park that hosts the main red-light area of the city, resides Bristol Experimental and Expanded Film, or BEEF. In meetings with Louisa Fairclough (one of the project’s founders) and Alexander Stevenson (who has a studio there), I spoke with them about both the project and its place within the wider context of Bristol, and beyond.

BEEF is made up of 30 members, comprising both studio holders and a wider constellation of contributors who provide organisational and programme/curatorial support. Somewhat unusually for artist-led spaces, the group is expansive and features a whole spectrum of ages and professional-levels. Influenced by Fairclough’s observation of CHAMP (in north Bristol) growing and defining themselves, after finding the building advertised on Gumtree she assembled a core group of five artists and curators - and from there the project quickly amassed a collective membership, who co-operatively make decisions within the project. Self-termed as ‘a film and sound collective with an analogue heart’, the specificity of both medium and approach that underpins the project appears to have given it both a succinct drive and focus, and, simultaneously, access to a global network of groups also forefronting the precarious medium of analogue film. Within a relatively short period of time the project were approached by LA-based Echo Park Film Centre offering to facilitate a workshop on film-processing using eco-friendly substances, which took place in April of last year. Vicky Smith and Laura Phillips (who largely manage and facilitate BEEF’s program of workshops), have since carried the baton of exchange onwards, delivering a version of the workshop to Cardiff’s g39. 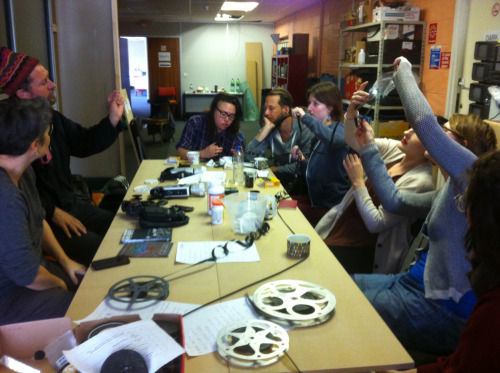 At the time I spoke to him, Alexander Stevenson was using his studio space as a hub from which to conduct interviews with the wider network of practitioners who inhabited BEEF on the very medium around which the project gravitated: analogue film. Gently echoing that sense of the ‘resource’ of which the project constitutes, Fairclough spoke of seeing the project as “functioning along similar lines to alternative art school models”, with education and knowledge-sharing as clear motivations. With film production on an industrial and commercial level having gone through a sharp decline, in some ways it seems perfectly logical that what would spring from that vacuum are pockets of artisanal analogue film producers, reverse-engineering its methods of production using easy(ish)-to-hand products. And in some ways BEEF’s multi-faceted approach may be seen to amount to a cottage-industry of this once, largely industrial process: encompassing a library, a store-house of pooled equipment, studios, a dark-room, an analogue editing suite, workshops, and lastly, a central space for housing screenings and facilitating meetings (Bristol’s own incarnation of the LUX Critical Forum hold their monthly meetings at BEEF). Even the book-keeping is done in-house, as the studio-holder Joyce Ho Long Yan, who is also a recently qualified accountant, has taken on the management of the projects books.

Stevenson referred to BEEF as being akin to a ‘tinkerer’s shed’: “It feels free, some kind of liberated space outside of institutions. Although most of the members are lecturers of some sort, perhaps that’s where that freedom comes from: they have come away from that place, to a slightly dark space where the walls are painted salmon pink, to think about radical film.” He identified a similar attitude in another collective in the city of which he is also a member, Interval (an artist-run group primarily comprising performance-practitioners), “both have a kind of ‘we can do anything’ attitude.” I got a similar sense walking around BEEF with Louisa Fairclough, as she pointed out a home-made contact printer, built almost piecemeal by Stephen Cornford, Matt Davies and Kathy Hinde, comprising custom-built motors and bastardised mechanical-parts. 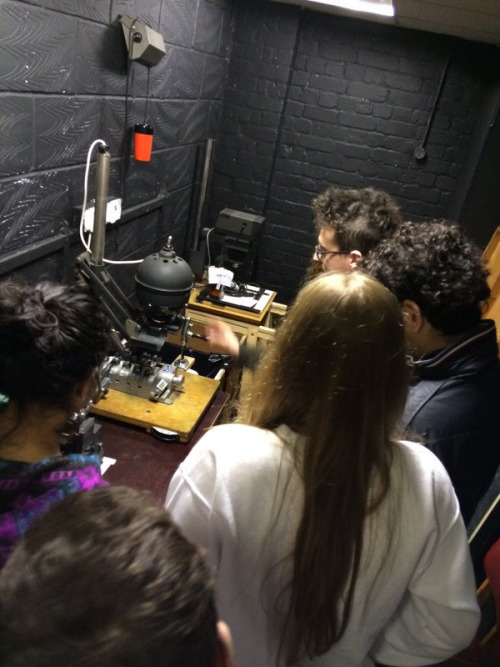 Paul Purgas, whilst on residency at BEEF recently, was being given workshops in the use of the 16mm Bolex camera and film processing when I visited. He mentioned how although he wasn’t necessarily inclined towards analogue technology, he was interested more specifically in the processes involved. Fairclough responded to this with the notion that perhaps instead of being purely medium-specific, analogue film could perhaps be more usefully considered as a method, with its ‘ways’ of production as having potential relevance within digital technology. Moving away from a kind of ‘purest’ approach of medium specificity, it’s interesting to think of analogue film’s methodological potential, as relevant to digital spheres of production, beyond merely emblems of a by-gone time sentimentalised with nostalgia.

Louisa also spoke about her desire of taking the means of BEEF’s distribution into their own hands, which raises an interesting point. Excuse the theoretical shift away from project-focussed particulars, but it feels pertinent in this context. The term ‘middle-class’ has gotten a bad name over the years, but in Marxian terms the middle-class are the members of a society who own the means of production and distribution, i.e., the factory owners of our early industrial days. Obviously things have changed, but I’ve wondered recently if we need to reclaim the term middle-class as something to strive towards, to reclaim it as the goal of owning the very means of our productions, rather than merely comfortable access to consumer goods, etc. In Bristol (and most other cities in the UK) we have one consistent hurdle to this: property ownership (in exactly the same manner as that between owning your home and renting it, in that the difference is the degrees to which you can lay down roots), without which projects will continue, to greater and lesser extents, to be beholden to the procurement of rental costs, and largely unable to undertake any long-term planning with regards to programming and investment in the project in general. Obviously this is only one area of agency, and it remains to be seen how BEEF’s hold on the means of distribution will play out. It strikes me as an important foundation to enact for any projects sustained long-term survival. 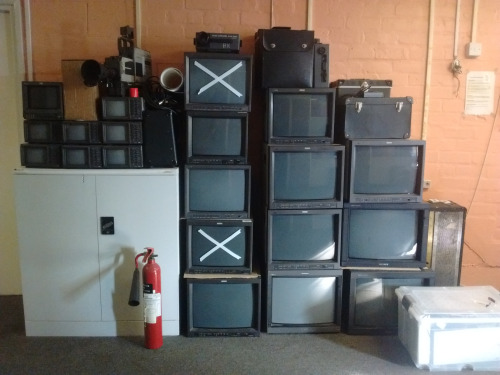 From the outside, as an audience member, I still recall visiting BEEF for one of the first screening events there, and suddenly recognising it as filling a gap, which up until that point, I hadn’t really been aware of. This gap was simple, but seems so often overlooked in relation to the presentation of contemporary art, where the work itself takes absolute precedence. It was the capacity to also function as a space in which to meet your peers, leading in turn to the consolidation, by accumulation, of those relationships. A social-space that facilitates unplanned sporadic encounters with those you’re working in close-proximity to, but might not know beyond faint ‘hello’s’. It could be that BEEF is particularly well-placed to facilitate this too, as both Fairclough and Stevenson recognised how the members own networks fan out and join up to the majority of the city’s cultural and educational institutions. 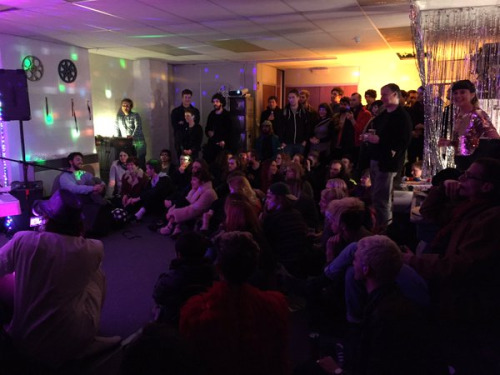 Intriguingly, Fairclough spoke of a tendency she had registered from some people working within experimental film of seeing a clear distinction and distance between themselves and the contemporary-art scene. Now, wanting to avoid placing value-judgements on this through assessments of its respective validity, what interests me about it is that such a distinction at least implies the perception of a clear difference in values between the two worlds. An interesting thought-experiment might be to see if this difference remains when the term ‘contemporary-art’ is further refined to name strictly ‘artist-led activity’? In this instance then, what strikes me as one of the biggest remaining differences between a delineation such as ‘experimental film’ and the ‘artist-led’ would be their own respective perception of their states of emergency, and thus survival. With analogue film more broadly, one has clear and discernible skills, techniques and equipment necessary to be both pooled and shared for its survival. In this, no doubt crude, thought-experiment it is as if it is the film-gene’s survival itself that is of paramount importance, over and above the survival of any individual filmmaker. Within the artist-led/independent ‘scene’ it appears a far harder task of defining what specific skills, techniques and equipment are needed to be pooled together to facilitate its own survival.

Looking for galleries and ways into the scene upon moving to Bristol, Stevenson noted that around the ‘mid-level’ point (i.e., before large publicly-funded institutions, but above graduate shows), the platforms in which to present artwork in the city were largely festivals, recognising that “if you’re not part of the festivals then you’re not part of Bristol.” Most notable of these, in terms of providing a platform for visual art as much as performance, is Bristol Biennial (effectively an artist-run project in itself). This clearly has its problems; when the main opportunity to both see and present work happens either annually, or bi-annually, those fallow periods between festivals come to the fore with vengeance.

Currently writing their next arts council bid, and discussing their next steps - after their tenancy at the current space came to an end in April of this year - Fairclough spoke of a nascent ‘manifesto moment’ gathering speed, looking back on the year’s activity, and reflecting on the guiding principles to take them into the future. I wish them luck on the road to middle-class-dom!

All images courtesy of Bristol Experimental and Expanded Film