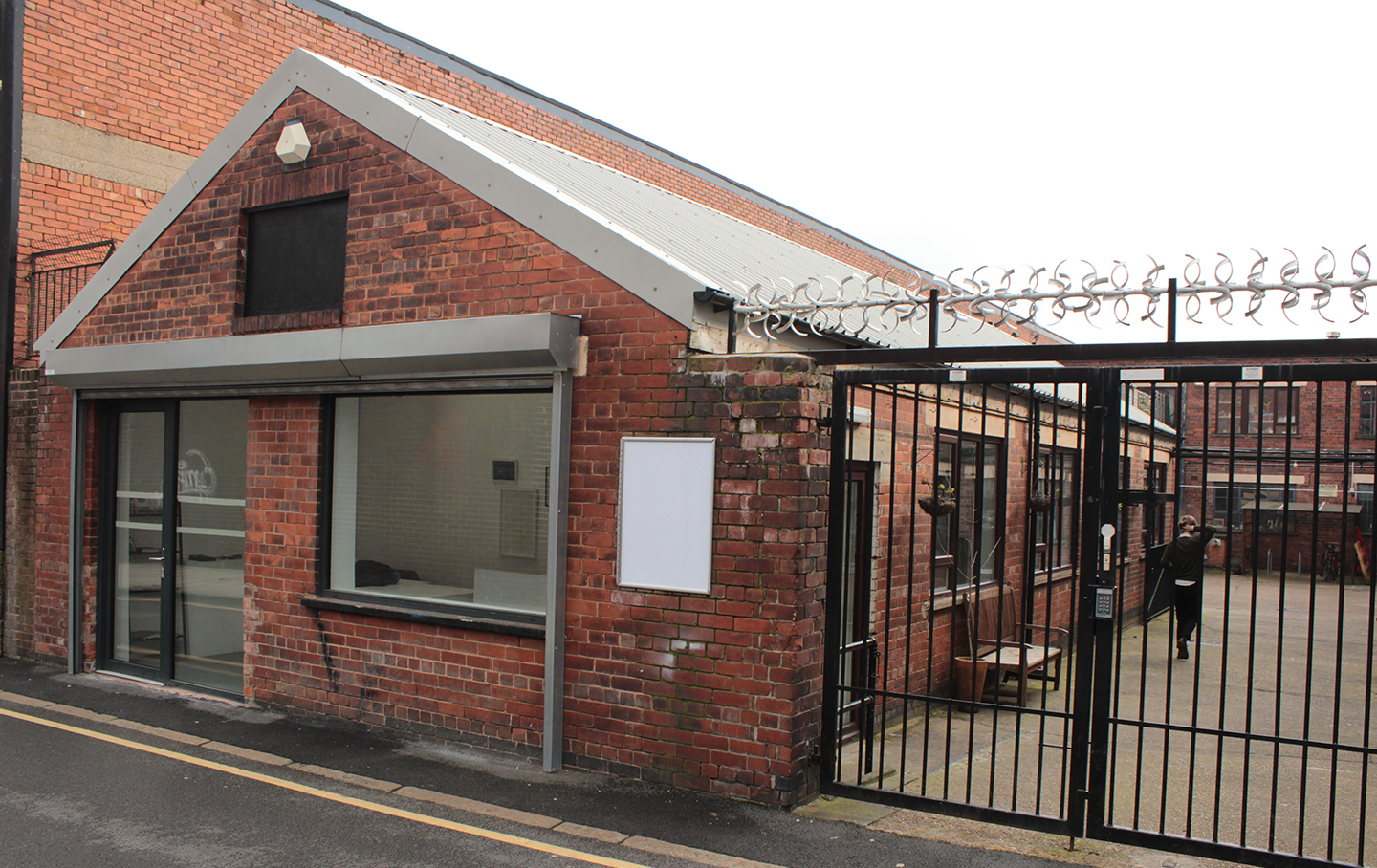 “I had developed a lot of relevant skills to running a space over previous years, and it’s an exciting thing to do as a job, but at the same time, the role can take over and feel more like a lifestyle choice…”

This observation, made at the start of our conversation with Bloc Projects, Sheffield, has since lingered with me as an example of a recurring trait in some artist-led galleries of a similar stature or legacy. I think what is common to what Charlotte Morgan, Creative Director at Bloc Projects expresses about operating the gallery, is the necessity to maintain the organisation through more and more strategic development funding schemes. True to any professional career move, especially in a Creative Director capacity, is the expectancy from those invested – socially, financially, advisory etc – to see the project be sustained, and grow. Within artist-run projects, the protection and expectancy from investors is as likely to be as latent as those cultural patrons of much larger galleries and institutions. But whilst the level of social-investment within both the artist-run and public institution could be comparative to one another, financial investment often is not, and this is a recurring detriment to the small/medium sized organisations within an increasingly large grey (funding) area.

Though to direct pessimism toward the wider deficiencies of arts funding in England is to miss the finer aspects at work here, as what has been happening recently at Bloc Projects, under the integrity of Charlotte’s (and Mark Riddington, Gallery Co-ordinator) labour to the project, is noteworthy and useful to highlight.

Bloc Projects gallery was established in 2002, as part of Bloc Studios, founded in 1996 by Sheffield Hallam University art graduates, and celebrating its 20th year anniversary in 2016. Though the gallery is sited at the studios, and within the ex-steel industrial complex that anchors Sheffield’s city centre, both entities are managed separately, with Bloc Projects being a rent-paying tenant of Bloc Studios, and a separately incorporated organisation. The rugged street grid formation of the red-brick units, where Bloc Studios and Bloc Projects are located, appears pertinent to the migratory expansion of the University and student demographic (itself a kind of neoliberal exchange from production to education, industrial to campus). A different form of production still occurs in the area, with Bloc Studios currently fostering a community of over 60 artists, surrounding a gated courtyard, where the gallery also sits, facing the street.

The gallery is a modest space recently extended to incorporate more room for the exhibitions, on-street access and enclose a reception area where the new Bloc Shop is developing to increase revenue for the organisation, offering limited edition prints and works by previous exhibitors. Finished to a relatively high-spec, the gallery feels atypical to the common aspects of post-industrial artist-led spaces. The backspace will be finished soon, fitted with kitchen and shower to enable an accommodating residency space, storage and office. 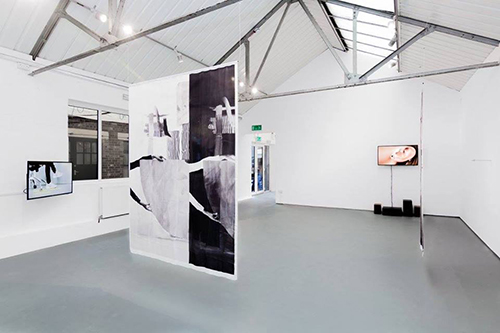 The core gallery programme consists of approximately 3 to 5 shows per year curated by the Bloc Projects team or guest curators, along with events and an adjunct programme supporting partner or member-led projects. Recent exhibitions have included the group show The Place of the Scene, featuring Fay Nicholson, Rowena Harris, Joanne Masding and Francesco Pedraglio, which also launched the gallery revamp; a performance event by Faye Green; and a Radio Anti event by Matthew de Kersaint Giraudeau & Ross Jardine. Around the exhibition and event programme led by Bloc Projects, other events and schemes that occupy the gallery space over the course of each year include a Member’s Show, partnerships with organisations such as Sheffield Design Week and both local Universities, and projects involving studio holders. This year it was Art Sheffield, the 3-week city-wide arts festival, for which Bloc Projects are a member of the consortium behind the event, and showed a video work by Beatrice Gibson. Around the adjacent corner of the gallery is the Bloc Billboard, a pragmatic platform to provide artists (recently Helen de Main and Charlie Godet Thomas) the opportunity to realise and show large image-based works to an inadvertent audience streaming past daily. Sprawling further are the nearby archways, also used as a space for a programme of projects. Bloc Projects, like the rest of Sheffield’s arts organisations, are extremely organised, comparable in some ways to Birmingham’s Digbeth rising of the past 8 years.

The numerous programme schemes of the gallery, which offer diversity and opportunities to different artist communities in Sheffield and the North as well as UK-wide and internationally, also demands a consistent spreading of administration and resources, and I wonder to what affect this impacts upon Charlotte or Mark’s input as creative coordinators. Is there scope to develop shorter-term projects, or does the programme or funding not afford such space to be flexible with? The pressure to maintain an organisation’s identity is as much an image of professionalisation as it is the actual doing of endless funding applications and presentations. The voice of the organisation is repeated and repeated, edited here to fit that word count, extended there for this talk. This is perhaps most prevalent in artist-led spaces such as Bloc Projects, which have built a substantial legacy and withstood the redevelopments around them, or moved to another site (like Sheffield neighbours S1). There’s more that hangs upon the continuation of artist-run spaces in the surrounding communities of young practicing artists, performers and writers. 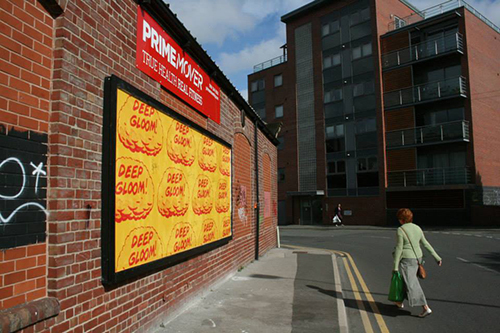 But it’s not the enduring building itself that predicates the pressure, though maintenance and responsibility can cause major headaches (thinking back to our first conversation with Dundee-based GeneratorProjects), but the demand by funding bodies to ensure the ‘cultural values’ defined by the regulatory structures are adhered, represented and protected by the organisations they support. Bloc Projects have proved that they can deliver on such terms, though perhaps the gallery programme is a reflection of the necessity to show how the organisation is providing opportunities to different artist groups and audiences, with several initiatives and schemes to attend to simultaneously, demanding a lot of time and energy for just two staff members, who are practicing artists in their own right.

The regular expansion of outreach and reception is also a requisite set by Arts Council England to organisations that support their programme through repeat Grants for Arts funding. Having continued to operate for several years through such schemes when funding was more readily available, Bloc Projects, like many organisations, were encouraged to seek more alternative strategic funding in addition to ACE support. After a period of developing options to help generate income, Charlotte notes how “…we gained a lot of advice, and worked on building up the Board. Over time it becomes more and more difficult to be a more informal artist-led space in a way - it’s artist-led in it’s nature, but it also needs a lot of strategic development work, staff time and a strong governance structure involving people who have a broad range of professional experience.”

A duty of this type of project is to support the local art community, from which Bloc Projects regularly receive proposals from artists who want to exhibit their work. Defining the gallery’s relationship with this responsibility is important, and such enquiries appear to be handled with more consideration than usual, through the implementation of both a ‘dry-hire’, and the Adjunct Programme scheme. Offering professional advice with funding applications and gallery install knowledge, Bloc Projects provide the space to members (only £20 for the year, with many other benefits, including field trips to Glasgow International and Berlin), whilst clearly making a distinction between what is part of the core curated programme and what is not. This is not to be detrimental to local artist communities, as Bloc Projects are obviously keen to develop a space that can platform the artists around them who attend their exhibitions and also have a good record of including local artists in their core programme, but rather highlights the tangle between identity of the programme, and the identity of the organisation. The delineation of ‘dry-hire’ and Adjunct exhibitions from the gallery programme is an efficient fundraising model for artist-led spaces in this regard, and is worth observing how Bloc Projects structure this within their model. 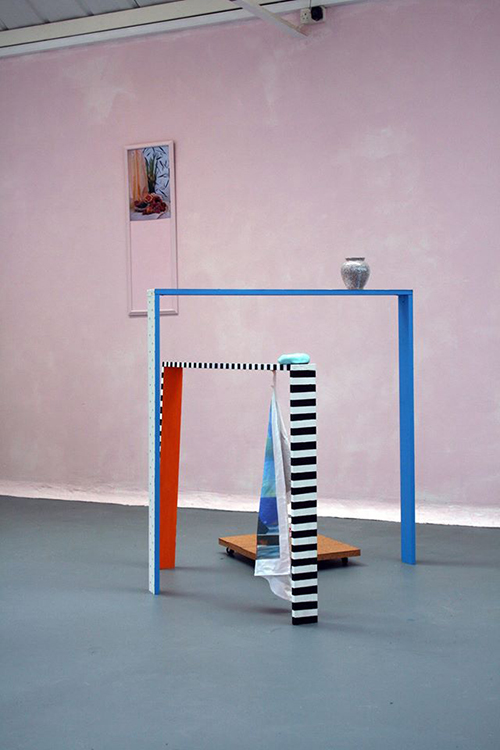 Bloc Projects is tied to many consortiums, as is the prevalent infrastructure across Sheffield’s cultural institutions, with an emphasis on festivals as a reliant strategy to increase public visibility and engagement. This year’s Art Sheffield, curated by Martin Clark, director of Bergen Kunsthall, Norway, is a good example of the benefits a city-wide contemporary arts festival (which many other cities are attempting to establish, to varying degrees of success) can bring to a gallery of Bloc Projects’ size, even if “Art Sheffield gets a fraction of the budget of something to the scale of Liverpool Biennial for example…”.

Though Sheffield’s visual arts organisations might not receive as much funding as it’s neighbouring cities like Liverpool or Manchester, or it’s comparative cities like Birmingham, the city appears to have more of a significant dialogical emphasis and support network toward a collective identity for visual arts. The Art Sheffield consortium involves Bloc Projects S1 Artspace, Site Gallery, Sheffield Institute of Arts at Sheffield Hallam University and Museums Sheffield - enforcing a peer-to-peer solidarity, independent of any financial solidity. Within this network, organisations navigate collective endeavours while maintaining the nature of what they individually represent or offer. Cross-partnerships with larger institutions or city-wide initiatives are potentially essential for small to small-mid sized organisations within the larger cities around the country. I think some of the more engaging or diverse events to occur at some of the current NPO-status galleries have emerged when hosting, or better, cooperating, with artist-run and curatorial projects by young or emerging artists. By leveraging such events financially, both parties can benefit from the reach of wider audiences and diversity to programme. This is not to imply that the larger galleries are financially secure or rarely have to look at generative partnerships with external private investors or (potentially dubious) corporate sponsorships. But for co-ordinators of artist-run projects, the notions of risk and precarity feel more apparent, as the financial infrastructure of the organisation can be whipped out from beneath far more rapidly. This is what Charlotte might be expressing when thinking about the role as a “…lifestyle choice…” at the start of the conversation. Running an artist-led project of such standing is a permanent commitment, and is too often made possible by a plenitude of unpaid time, labour and personal investment. Bloc Projects staff have been successful in affording the time to run the gallery by securing funding to pay themselves a wage, and by doing so, have effectively managed to create their own administrative roles within the project. However, given the nature of the roles, this is a modest salary, and is often put on hold during periods of uncertainty, following unsuccessful bids. Designing roles to suit changing demands does at least generate a degree of creative agency, but nevertheless, there’s also often the demand to pay yourself a wage to create more time to seek further strategic funding. As Charlotte noted toward the end of our conversation, running an already-established arts organisation like Bloc Projects is analogous to “minding a child that is not yours”, the responsibility made starkly apparent by the ongoing negotiations that are hinged upon the multitude of stakeholders and financial backer’s support.