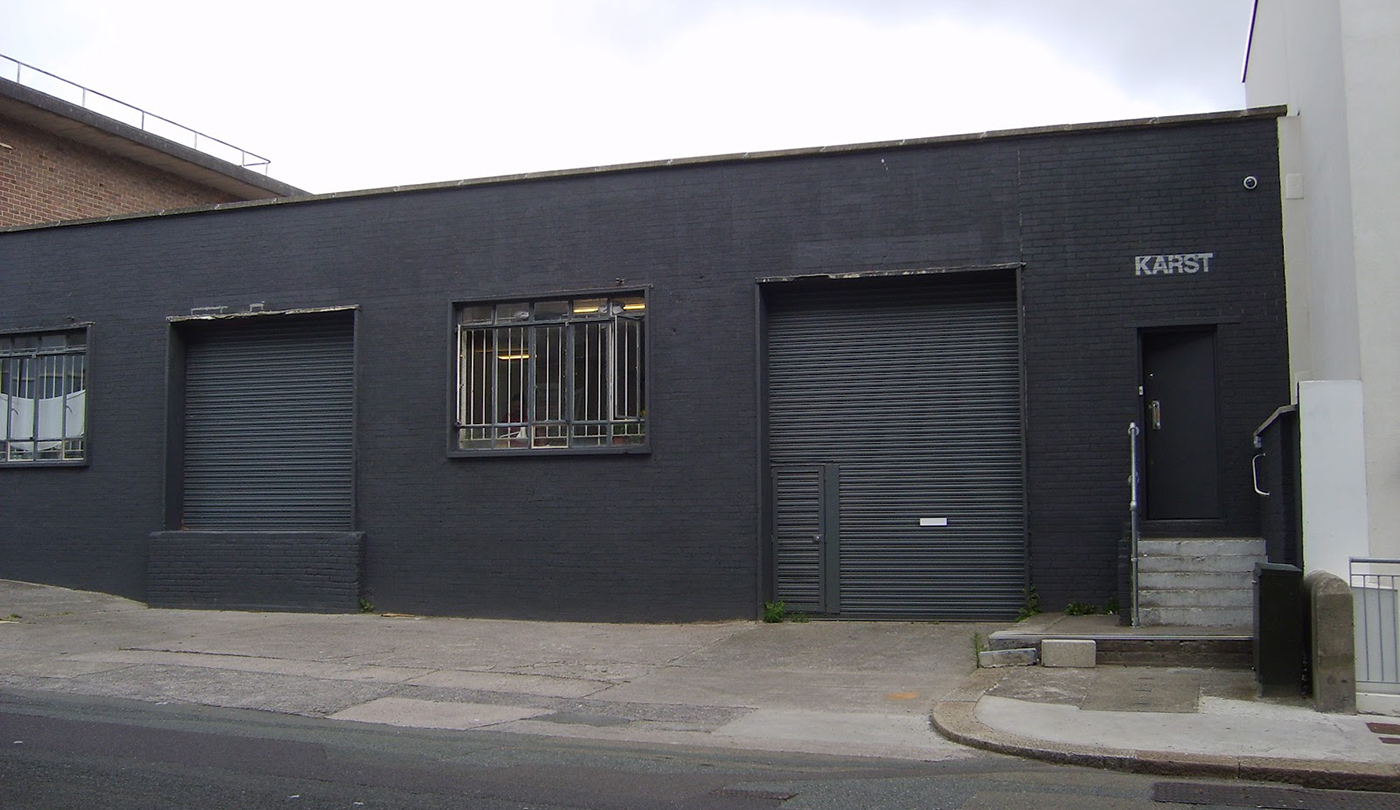 KARST is an artist led contemporary art gallery and organisation based in Plymouth, currently co-directed by founder Carl Slater and Donna Howard. The gallery, whose previous life has had a variety of uses, has presented a core programme of exhibitions since 2012, ranging between solo and group shows, and regular shorter events and screenings. Parallel to the end of Union Street, a mile long road that leads from the central high street down to the fringes of a semi-vacant industrial estate, KARST pronounces the austere black façade and minimal logo reminiscent of a post-downtown LA garage, humming quietly next to the still-operational workshops, yet defiantly against the other permanently-vacant redevelopments; a familiar landscape and journey visiting many artist led spaces.

Whilst sited within the displaced or marginalised activities and businesses of the city, and being one of only a handful of contemporary art sites in the South West of its size to maintain a steady beacon of activity, KARST is becoming a bit of a haven to established artists or curators, ostensibly offering an opportunity to experiment within a young but biggish art gallery. Recent exhibitions have included works by Francis Alys, Maria Fusco and Martin Creed. John Russell had a solo exhibition last year, and internationally acclaimed curators such as Franz Thalmair and Lorenzo Bruni have produced projects in the gallery. 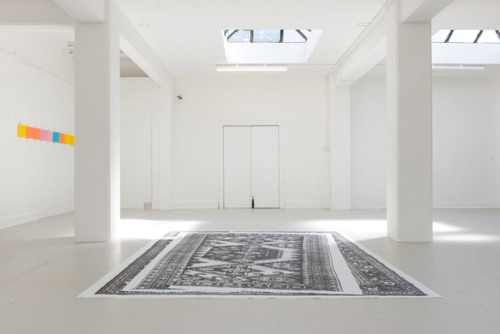 Egon van Herreweghe,​ Chinese imitation of an Iranian Ghom, 2015, from A Set of Lines, A Stack of Paper, curated by Franz Thalmair 2015

Showcasing work by established artists can create a rather indeterminable understanding as to what, or how a non-institutional, not for profit gallery, in this case KARST, is to operate amongst audiences. Governed like a DIY project in a glassless façade building with no reception nor café (heaven forbid…), yet representative for bringing an international art community to the local and SW audiences alike, KARST acknowledge their position in an institutionally top-heavy city akin to the ‘bad cousin’, partly placeless within the trajectory of publicly-funded art galleries in Plymouth.

The difficulty of considering KARST within an artist led ecology, and perhaps reason for the outcast analogy, seems in part due to the growing scale of operations from the relatively young, small-staff gallery. This contrast is deceiving, which Donna describes as a double-edged sword ‘…working within the conditions you know, it can be really tight or difficult at times given the budget we are working on in comparison to some other spaces. This can have an impact on the relationships with the curator, where at times, some of the people we have worked with weren’t fully aware of the ‘basic’ operational level we function at, and have to learn that we can’t provide everything they might have expected’.

The flip side to maintaining a DIY sensibility is the attractive proposition it offers for established artists to enter, as there’s less bureaucracy or expectancy on their behalf, and are able to treat the space as a useful testing-ground and opportunity.

Many younger and emerging artists and curators such as Marie Toseland and Rowena Harris, or Louise Chignac and George Vasey have also worked with KARST or previously shown work there, either through the biannual Open Call, which receives between 400 – 600 applications, or ongoing contact with the directors. 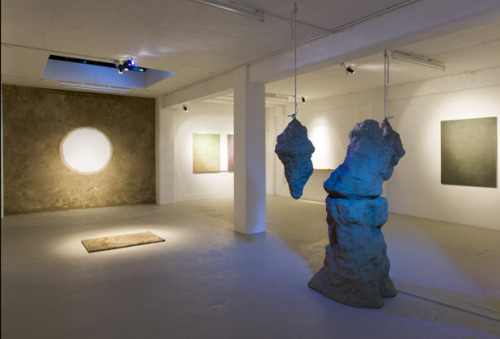 Installation view from A Journey to Avebury, curated by Louise Chignac, 2014

KARST’s growth in terms of applicants, audience reach, financial backing and programmatic maturity within a short span of time, appears to be due to a handful of happenstance and strategic reasons. Firstly, there are clear advantages to operating within a large, yet relatively sparse Arts Council England region, and opting not to apply for National Portfolio Organisation status. Having considered the prospects of NPO funding, KARST chose not to submit for the triennial review of organisations financially supported by Arts Council for a fixed three-year term. There are currently 81 NPO’s in the South West, the second lowest amount across the country, receiving 59m over the 15 – 18 period.

Rather than applying to join this roster, KARST submits funding bids approximately every 18 months via the GfA route. Since 2012, KARST has successfully submitted 3 GfA’s, increasing their bid nigh on tenfold since the first round production funding of £10000. This way of managing the budget is more precarious, but offers a more flexible negotiation with events, screenings and shorter developed partnerships, creating a more intuitive and dynamic programming process, as Carl reflects, ‘I have a persuasion to formalities in the way I make work (as an artist), so I’m naturally attracted to projects that are delivered in this way, but then programming the space it is about throwing in a shorter project or event that alters the rhythm of the gallery’.

The socio-economic structure of Plymouth also seems to benefit the operations and public engagement with the gallery, as property value is less than the national average, thus affording the rent of the large space more plausible. Housing is cheaper too, contributing to the retention of recent graduates in the city who are receiving advice from KARST as a gallery model to work from in order to establish other project spaces around the area.

Plymouth is a bit unusual in that it also boasts two public galleries within academic institutions, The Gallery at PCA and Peninsula Arts, integrated within the art college and Plymouth university respectively, both with independent curators and national reach, cultivating an engagement with public contemporary art throughout further and higher education. Linking with the university, KARST provides a graduate residency scheme, which includes a rent-free studio for 6 months, and has seen more and more students attend the private views and visit the shows over the past 3 years. 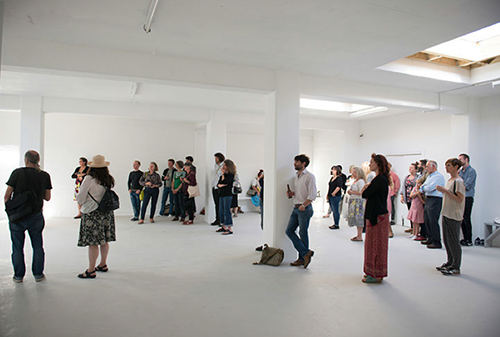 Opening performance of Among Remote Lost Objects by Tabatha Andrews, 2015

In the first year, Carl and Donna had to make many personal and financial commitments to the project; an incredibly testing experience given the limited budget and (quite possibly) coldest gallery space in the UK during the long depths of winter (and why it was previously once used to store meat). With a greater budget, the roles have become more ‘clear and productive’, rather than attempting to cover all aspects of the gallery, as Carl can concentrate more on curating the programme, whilst Donna heads new business partnerships, though both admit they ‘still have to do many tip runs’.

Ultimately it comes down to the integrity to the project, and smart business-minded negotiations, evidenced by the group, which has enabled KARST to continue developing new work and partnerships. ‘I’ve realised partnerships are very important, working with other spaces nationally and internationally. So we can fund the additional production costs of each exhibition, we seek to work with cultural embassies in the respective countries, to levy the funding of the show and contributing whatever we can towards artist’s fees.’ 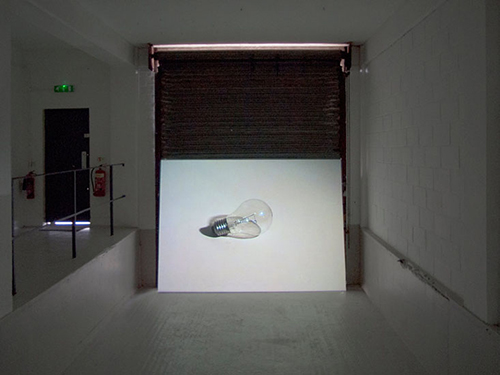 In order to achieve consecutive growth, KARST must continually evidence ways in which the organisation is working in new areas and reaching more audiences. Donna acknowledges the shelf life of any project, and I question what happens when an organisation does reach its peak capacity in terms of outreach and production? Does it plateau, autopilot its programme, cushion or even cleanse radical or risky exhibition making, propagating safe, uncritical thinking or normative and accepted notions of culturally engaged practice? Commitments, investments and lifestyles have to be maintained, so job security is a necessary precaution, which in turn might placate challenging programming. Maybe this is a cause of death amongst young or smaller organisations granted the potentially fateful NPO status; it’ll be interesting to see how some of the current portfolio fair over the next three years in comparison to KARST.