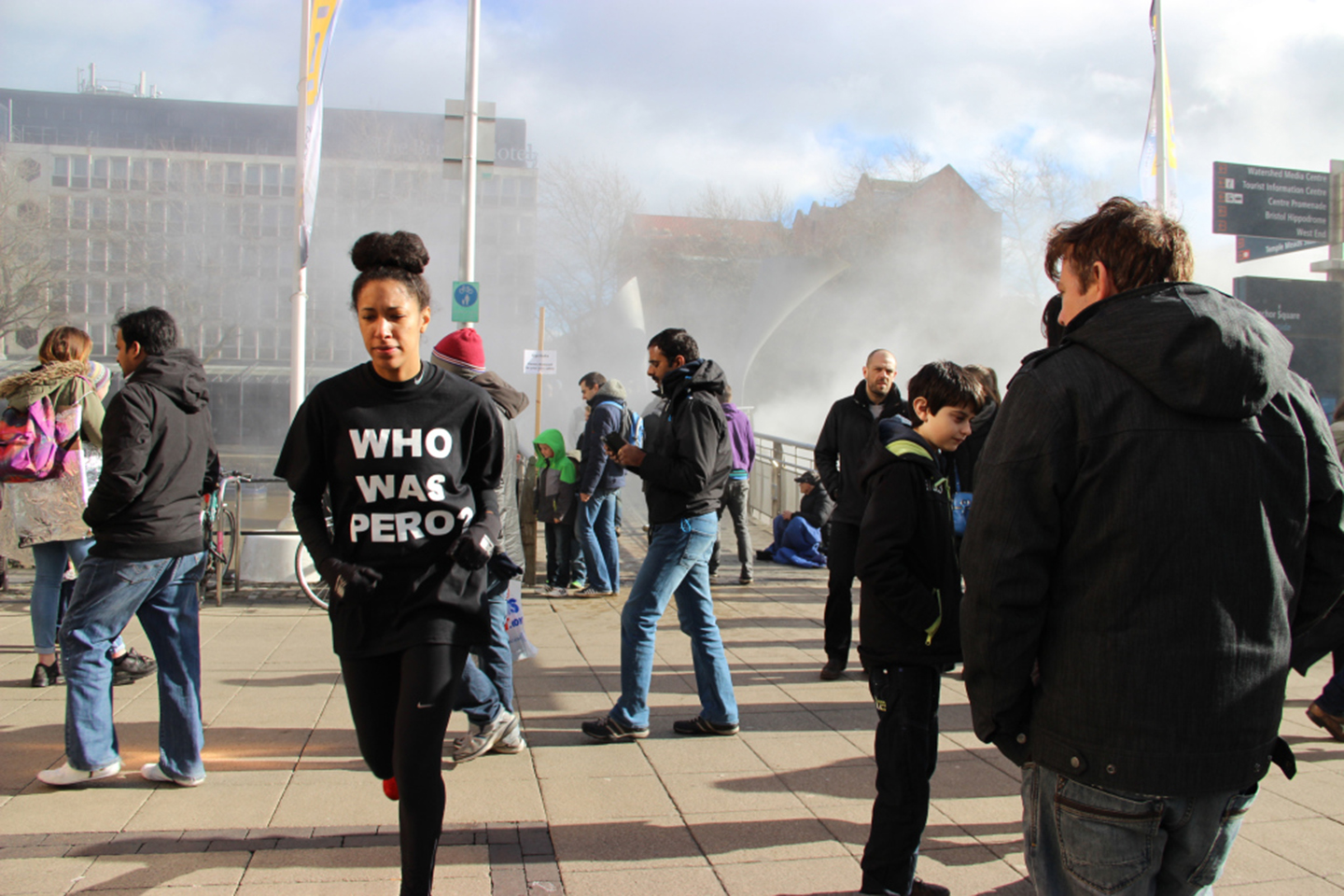 Haunted by Others... Libita Clayton

What About the Work we Choose to do?

The impulses that lead artists to their creations are hard to chart. Ahead of her event on 21 Feb 2016, Absent Ruins, I spoke to artist Libita Clayton about the emotions and institutions she navigated to create this work. Clayton is inviting the public and selected guests to converse on Black history; to connect memories and start to fill the empty cavities of unestablished archives. Alongside activists and artists, there will be ghosts listening silently, swelling the room with unforgotten feelings.

Why do we even bother making art? I don’t mean this as an insult, and I don’t think there is only one answer- art is an animal too evasive to catch and cage. I’m also not that interested in arguments about the purpose of art (most of which, tldr). I’m interested in how it feels emotionally to do artistic work, and how it relates to the other kind of work - the one you’re forced to do to pay the rent.

Haunting my thoughts on these subjects - emotions and work - is Marx’s theory of alienation(1). As a crude simplification, working for a wage instead of working on something you actually want to do, can make you feel detached from and loathe your work, your peers, and even yourself. The more menial the work - the greater the loathing. Consequently, the work of creating something meaningful (including but not limited to art), can feel self-affirming.

This seems to make sense, though I remain a little dubious - many artists I meet aren’t really overflowing with authenticity and self-assurance - but let’s go with it and see where we end up. If most work alienates you from other people, is making art a way to connect?

A year ago, before working on Absent Ruins, before its preceding parent event, BS2, Clayton produced a work because she was pissed off.

‘I really felt this void ’, she tells me, ‘I felt upset, and shocked, that a conversation wasn’t happening ’.

The conversation she’s talking about, the one that’s not happening, is about slavery. Specifically, Fog Bridge, an artwork by Fujiko Nakaya, was attracting a lot of media discussion none of which made reference to the fact it was taking place on a bridge that is intended to be a memorial to an enslaved man called Pero. It is one of the very few sites in Bristol that is supposed to recognise the fundamental role slavery played in the city’s development.

‘I felt responsible to start that conversation ’. 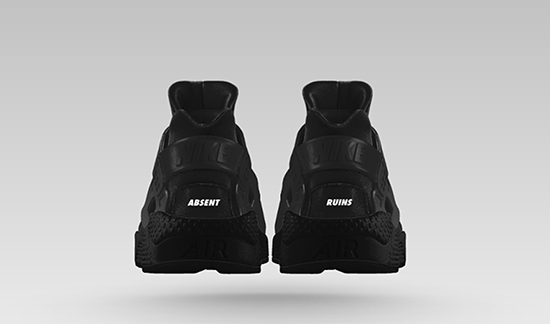 Absent Ruins takes place alongside an exhibition of John Akomfrah’s film installation, Vertigo Sea. In a talk about his work, Clayton was struck by the idea of a doppelganger - literally a ‘double goer’. In this context, the double is the Black stereotype. Clayton says that for both her, and for Akomfrah, there is one version of themselves which they identify as - their personal individual characters. Then there is this other version of them, seen from the outside - the version seen through a racist framework, inscribing them with predetermined characters.

‘I always feel like I have two visions. I’m mixed race: I’m Cornish, and I’m black. And the black part is an absence, because I didn’t grow up with my black family, but socially I’m put in this category ’.

People of colour describe similar experiences again and again. That predetermined character is projected from so many angles, by so many media- so how could they not be aware of it? As James Baldwin put it, inside every black person, is the voice of a little white man.2

The paucity of education about black history in the UK creates a vacuum, pulling Clayton in. And the way she goes into that space, inviting many black voices with her, speaks of the many black histories that are not just passively omitted, but often actively silenced.

‘There is something really interesting about the archive– and the presentness of creating an archive… creating something now for the future ’.

Clayton’s approach to time is dynamic- it’s moving and changing constantly. The past is not a fixed record, and the future is not a fixed goal, they are being created in the present moment. This applies more generally to the actual work of making art.

Clayton is sometimes put in a box labelled ‘Emerging Artist’. Emerging to what exactly?

‘I was part of the paying artists campaign, and at one of the meetings we were discussing what artists should get paid - and these categories came up. It was the first time I’d used terms like that. Suddenly there was a hierarchy - established and emerging ’.

Making one work voluntarily often holds the promise of future work with remuneration. Perhaps here, the distinction between the work we choose and the other kind of work, starts to perforate. At a certain point people stop feeling like they want to be an artist, and just feel that they are an artist. This transitional moment, can often be when the work starts to pay. Understandably, an aspiring artist’s dream can be to reach a point where the work of making art, fully replaces the other work of just getting by.

You can be free to create art however you want- but you can’t really share it, or get paid for it, on terms of your own choosing. To do that, you need to work with the art industry. Inevitably, this involves negotiation, and it shapes the work.

‘For me, there are two parts. There’s a live moment and then how it lives on; how you contain it; how it has a legacy. So I grapple with people feeling something there and then, and documenting it to make it part of a portfolio… You know, otherwise you just don’t have any work. You need that documentation to make it as an artist, to build a website or show someone what you have done ’.

In the past year, Clayton has worked alone on Who was Pero?, with artist-collective BEEF on BS2, and now with Arnolfini, one of South-West England’s primary art institutions. Throughout, making the work has not been automatically self-fulfilling- that aspect has required effort: ‘You need to be self affirming. You value yourself ’. 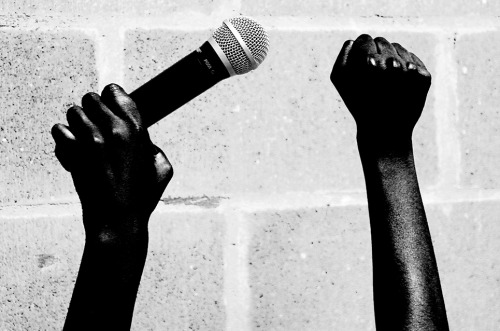 Marx’s theory of alienation does seem useful for understanding some of the feelings involved in making art. And at least for Libita Clayton, art offers a space for making genuine connections with other people. Yet, the theory, as a universal claim, just seems too clean. Making art is muddier. You can’t examine a river by picking it up to hold in your hand- you can only let yourself feel the force of it rushing around you.

Through conversation, Clayton puts herself at a confluence of different positions. She finds a way through oppositions of personal choice and compromise; of alienation and connection. Marx’s theory suggests art could be some sort of cathartic final resting point- a plateau where we’re finally at ease. But Clayton’s art is more open to change, too unending.

‘It’s the cycle of things that really interests me; the way historical moments come back around’.

The absent histories, the doppelgangers, and the potential futures, all seem to haunt Clayton’s work. They hover around, fading in and out like voices competing for a particular frequency on the radio. Instead of offering us one voice, Clayton offers us many. Instead of one snapshot of a scene, she shows us the vacillating reflections bouncing off the surface of a river, infinite versions of a face staring back at you.

In conversation with Anthony Elliott

1. Economic and Philosophic Manuscripts of 1844, Marx, K. – but also, watch this brilliant video of Gillian Anderson summarizing the theory.

2. This quotation haunts so much writing, including Toni Morrison speaking about why she writes. The sentiment is relevant throughout Baldwin’s writing, but if anyone can find me the original reference that precedes this ghost, please get in touch.