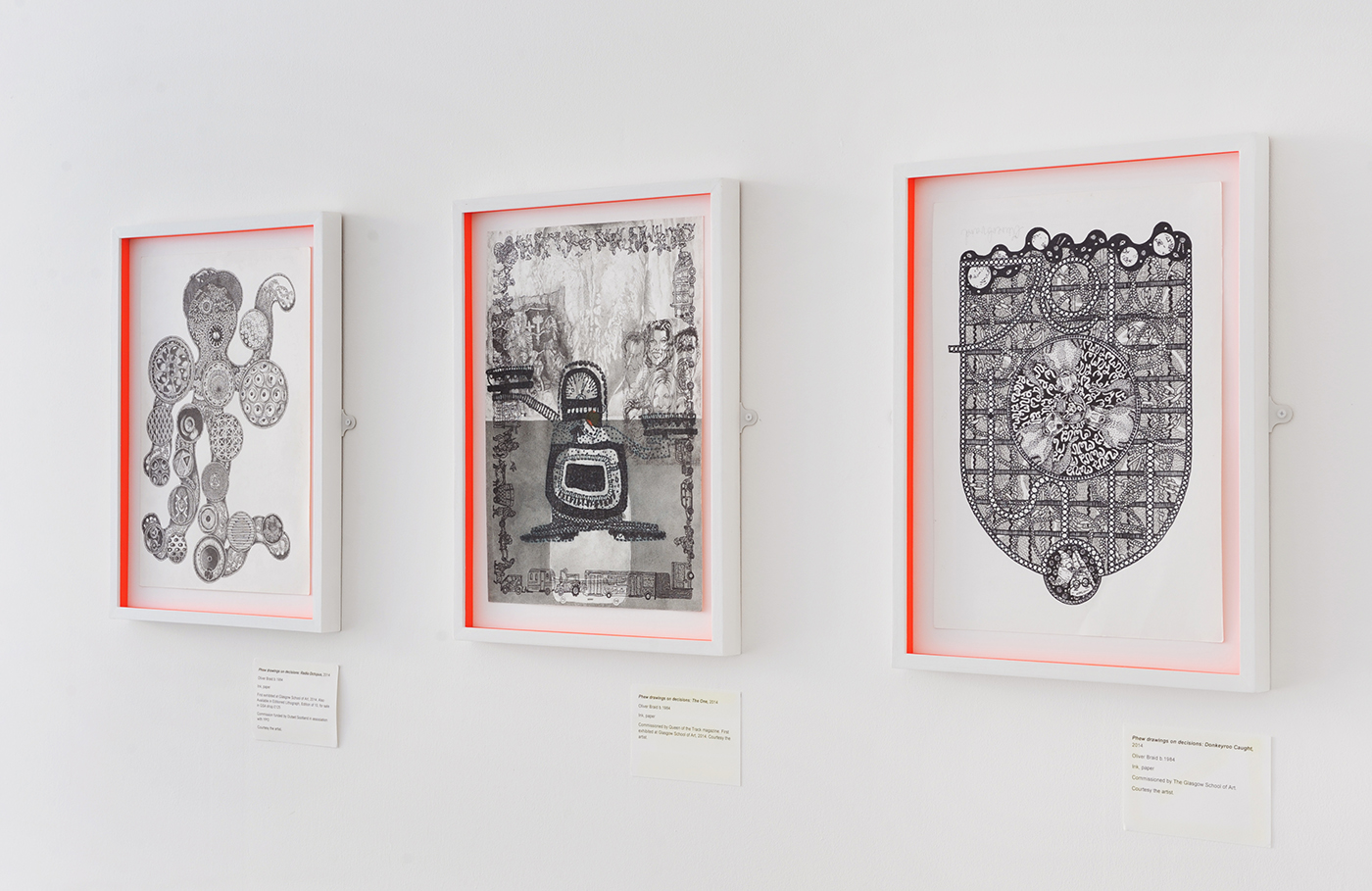 Phew Drawings on Decisions, Image courtesy of the artist

Oliver Braid (1984) is a Glasgow-based artist who we first met at MANY studios where he was the Graduate Residency coordinator. Recent projects and output includes releasing his successful funding applications online as reference material as a countdown to Christmas (2014), and receiving a Creative Scotland Artist Bursary to develop a ‘top-secret’ project to be launched in Glasgow this September.

Doggerland - When we last spoke you mentioned wanting to spend the year possibly only producing one drawing, stripping back your production output, does this still stand as a process, and if so, what ideas inform this decision?

Oliver Braid - I think I’ve sort of worked out that I’d like to be in a position to make maybe four drawings a year. Realistically each drawing I’m making takes about three months of on and off work, which is how I tend to work on them. So it’s still quite relaxed, but not quite so little as one. Aside from this I am also working on a larger scale project, although it’s in extremely early stages. I feel this year might be quite productive; but specifically because I am reducing the amount of time I spend worrying about being productive and about being seen to be productive. I think right now I’m very keen on pushing a Praise of Idleness type approach to being and making; this seems to be where I want the work’s production to be situated philosophically or politically when it is involved in a public situation. I’ve always been interested in justifying why a human would make an object, but now I’m also interested in why (after making an object) it should then be seen by other people. This led to some clashes in my previous work with Many as I couldn’t really answer that question as to the use of sharing without being cynical – and I want to be critical, not cynical.

DL - How has not having a studio affected your production? Especially with regard to what you called a move away from your more socially-focused ‘Projects’ towards your more solitary/withdrawn ‘Objects’? Has the shift in the actual space of production done anything to confound or consolidate this position?

OB - My life’s changed quite a lot since I left Many and in a lot of positive ways. If anything this has made me a stronger advocate for striking out on one’s own. As you both know we had a lot of philosophical differences and now that I’m not in that space I can focus purely on the views that I think are the right thing to do, rather than put energy into things I’m not 100% behind. My studio at Many was also right in the middle of the social space which made it much harder to concentrate. Now I am working from home I can spend all day in my pajamas if I want, but I can also be on the computer doing my emails whilst I drink my morning coffee, which leaves time then to get on with other studio work and reading. My flat is totally silent in the day too and I don’t have to hear anyone else talk about their ideas whilst having lunch etc. There’s nothing to interrupt my stream of thought, and because I’m an only child and used to spending a lot of time on my own I am normally pretty occupied. Working at home over the last six months has been the first time in a while that I have really had ‘lost in work’ streams of thought. It also makes me more ambitious in terms of experimentation, now it means I can work on something at home and no one can see it until I am ready for them to see it. This environment is totally conducive to my working approach, I move around a lot in the day – from working on the computer, to drawing, to reading and to cooking. Here I can do everything in one place and importantly I can smoke whilst I work which I could never do at Many and it can be a problem when a smoking break interrupts your work-flow. Also in other ways since leaving Many I’ve had some good experiences, I sold a lot of work in one big go and I got an artist’s bursary from Creative Scotland to help me develop all my new strands of work this year. I feel quite settled for the year and I know what I’m doing; I just don’t want to give too much away for now.. 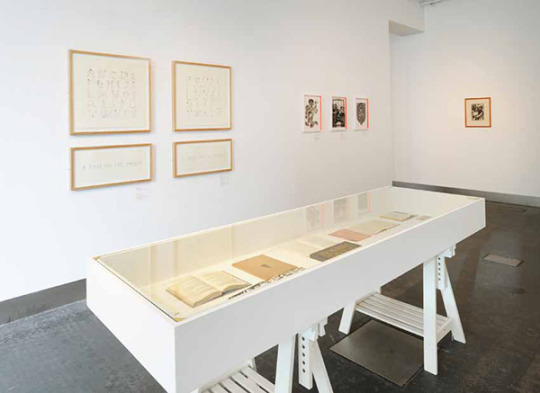 Image courtesy of the artist

DL: Could you give a synopsis of your current relationship to/conception of ‘objects’?

OB: This is so complicated and long, I’m not sure right now how to approach it. I would say they are good and they are anything. About five years ago I would have said they were, or should be considered when talking about my own work, ‘static artworks attempting to articulate social situations through representation’. As I said before though, what I’m most interested in now is more about how making an object and sharing your making might be justified and what the ramifications of those justifications might be. Partly that is involving explaining through some more overtly hermetic writing, an example of which is below:

In theory the majorities of practice appear to be judgments unnecessary to apply. Airing insight into these adjudications additionally incites old engagements of ethical intrigue; whether morals of maker affect outer world through moving material. Does self-expression as matter moving produce positioning, which affects outwith argument? Positions, delineated through commitments conjuring contributions and ensuing argument, can be credible, approved and opposed. Confessional work presents paradox for affective positioning through argumentum ad hominem.

The ex-concessis species plays back positions of proponents to points of incoherence and its ethotic cousin attempts to establish track records. An exemplary instance of agreement appears to approve an isolated application of the ethotic; assessing honesty of witness against prior dishonesties. To correlate the aforementioned misdemeanour universally alongside any other aspect remains unapproved. The ex-concessis also distinguishes sole satisfaction in solitude; requiring its isolation acknowledged in advance of argumentative approval. Fallacy ensues if position replayed acts applicable beyond collection of commitments under inspection.

Positioning’s affective quality isn’t argument in a sigil situation. With either argumentum ad hominem contribution remains consequently conscious and affectively static, albeit rarely invalid. The affect, in free belief, is positioning not genesis. Assessing even work with disavowed genetic impetus should separate subject from seeing and place premium on positioning; forgetting focus for composer making matter move. Archiving attributions and associations to manipulated matter remembers reason and prolongs puzzling proceedings. Regardless of positions positioning affects alone, illogically. It gives but gain halts by it becoming given.