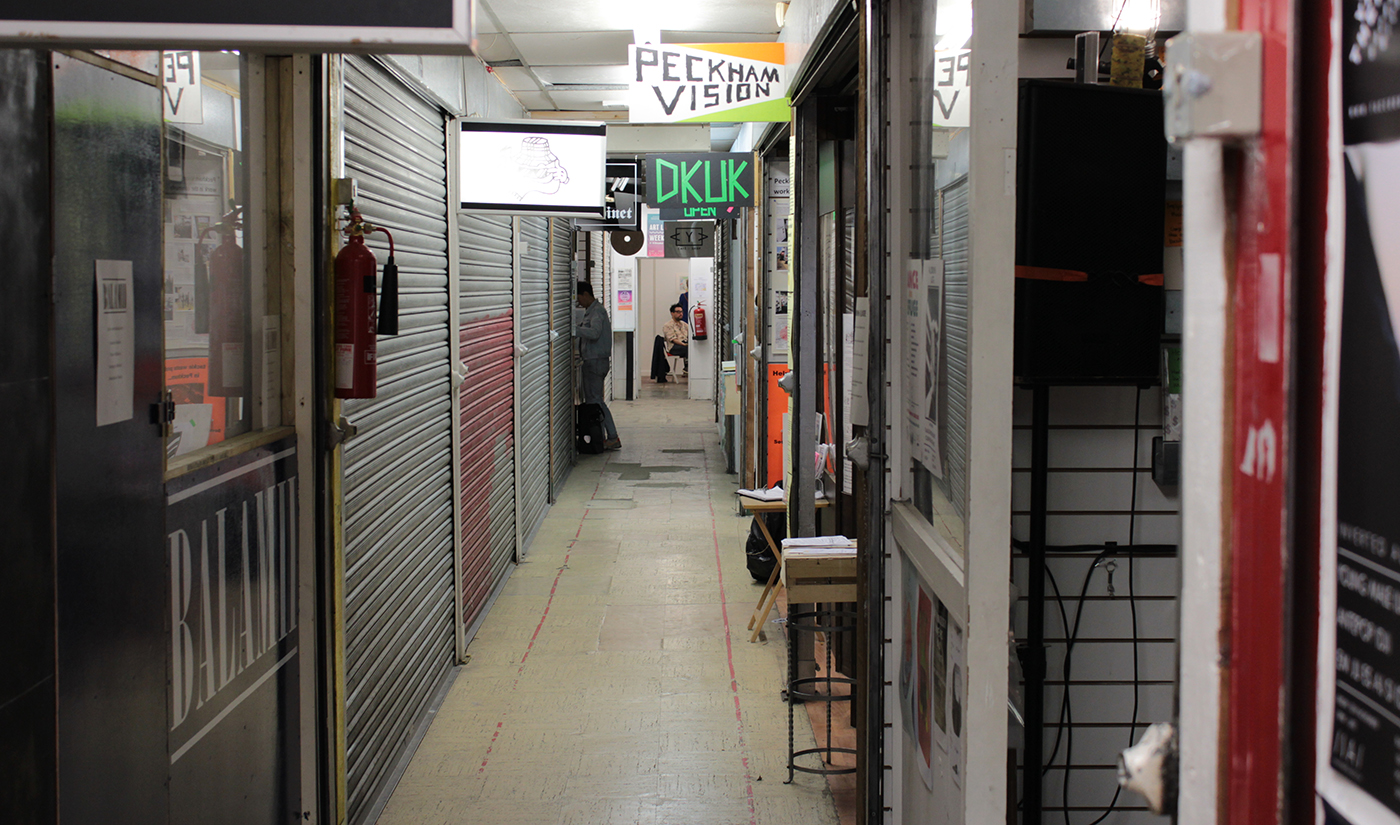 Art Licks, founded in 2010 by Holly Willats, is a London-based organisation that supports artist-led and under-represented galleries in the city, through print, tours, listings and online. Since 2013, the annual Weekend is an opportunity for many of these spaces to showcase their activity, often programming specific events and after-parties. In its third year, Doggerland surveyed some of the activity around Deptford, Peckham, Hackney and Hoxton, and met with the artists and coordinators. Here are some of the highlights, and after-thoughts:

‘Book-ish: A book fair of sorts’ is described by Drozd as a ‘mid-career survey’, showcasing over 40 artist’s publications who 38b have worked with over the past 5 years, using their flat to host exhibitions and events. It’s an impressive legacy, given the frequent disruption of domestic order, to live around the exhibitions, clear furniture and host the art crowds during events. There is a notable trend in this year’s lineup of participating project spaces using their own homes to host activity. I counted over 10 different residential sites, some specifically open for the Art Licks Weekend.

This move to the home is driven by the economic constraints and restricted access to in-development property, happening all over the UK but emphatically rampant in and around London. On the one hand, domestic galleries seem logical and sustainable, yet on the other, are another retreat from the strictures of neoliberal policy, as incremental deregulation of the market favours the property developers and landlords, stripping the voice and public profile of artist-led activity. As Ross Jardine poses In ‘Making Room: Domestic Spaces as Exhibition Spaces’, ‘there could be a question about how, and who, they (domestic galleries) interact with beyond their immediate networks’. Art Licks is potentially a useful pedestal to begin this discussion. 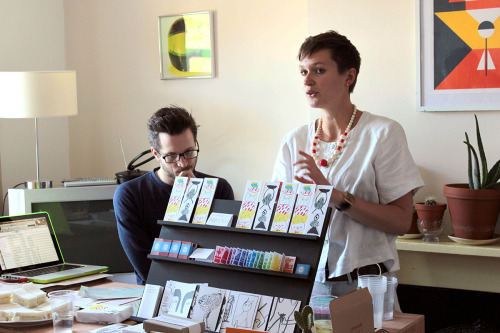 38b is an example of the more positive communal aspects of domestic exhibition space, created by modest support and pragmatism. Over the years, the projects have become ‘more interested in maintaining the domestic environment’, integrating with the furnishings of the flat rather than attempting to emulate the conditions of a white-wall gallery. The atmosphere is homely, welcoming, the flat is populated throughout with spider plants and succulents, record collections, and artwork. Powerful Vietnamese coffee with condensed milk is served, along with cucumber sandwiches with the crusts cut off. The notion of sharing and purchasing the artist’s works in the show feels more conducive to this type of space.

The opening event on the Friday, a ‘coffee morning’ featured readings by Susannah Worth, Jonathan Hoskins, a spoken-word recording by James Wilkes and tarot reading from Rosalie Schweiker & Jo Waterhouse on the balcony. Green tea fortune cookies made by Worth were served and shared, to accompany her reading from ‘Digesting Recipes: The Art of Culinary Notation’, recently published by Zero Books. Hoskins, currently profiled in October’s issue of Art Monthly, read from a short text work produced last year titled ‘Before an Emergency’, delivered twice over, at great rapidity, awakening a renewed energy into the dense account of bureaucratic stiltedness.

Other examples of artist-led projects occupying domestic spaces were the joint-performance events at Flat i, and Ingrid, in the same small block of flats located on Deptford High Street. The former presented a new site-specific work titled ‘Platoon’, by recent Piet Zwarte graduate Philip Ewe, who managed to optimise the crowd and flat into a rapturous spectacle. Ewe seems to posses the innate ability to both humour and manipulate a social situation around an idea; on this occasion the thoughts are scattered across self-help coaching and therapy, grossly-inflated self-obsession, and more surreal personas.

By efficiently coercing everybody onto the small balcony, Ewe proceeded to move around the flat by himself, roaming room to room, with a mic projecting his inner dialogue/ directions to the audience outside. The language is tight, quick, partly-improv. The conversation is mostly a collection of accounts with others, hopefully fictionalised, flitting between hipster dieting and the verge of collapse, high-end property buyers’ demands for reflective windows, an analogy to a bowl of cress and regurgitation, before culminating in a game of catch-me-if-you-can, during which the entire flat begins to fill with a dense outpouring of smoke. The balance between the spectacle of the event, with which Ewe has staged in a number of different situations, and maintaining a criticality is well poised, and Ewe’s performances demand to be seen by wider audiences. 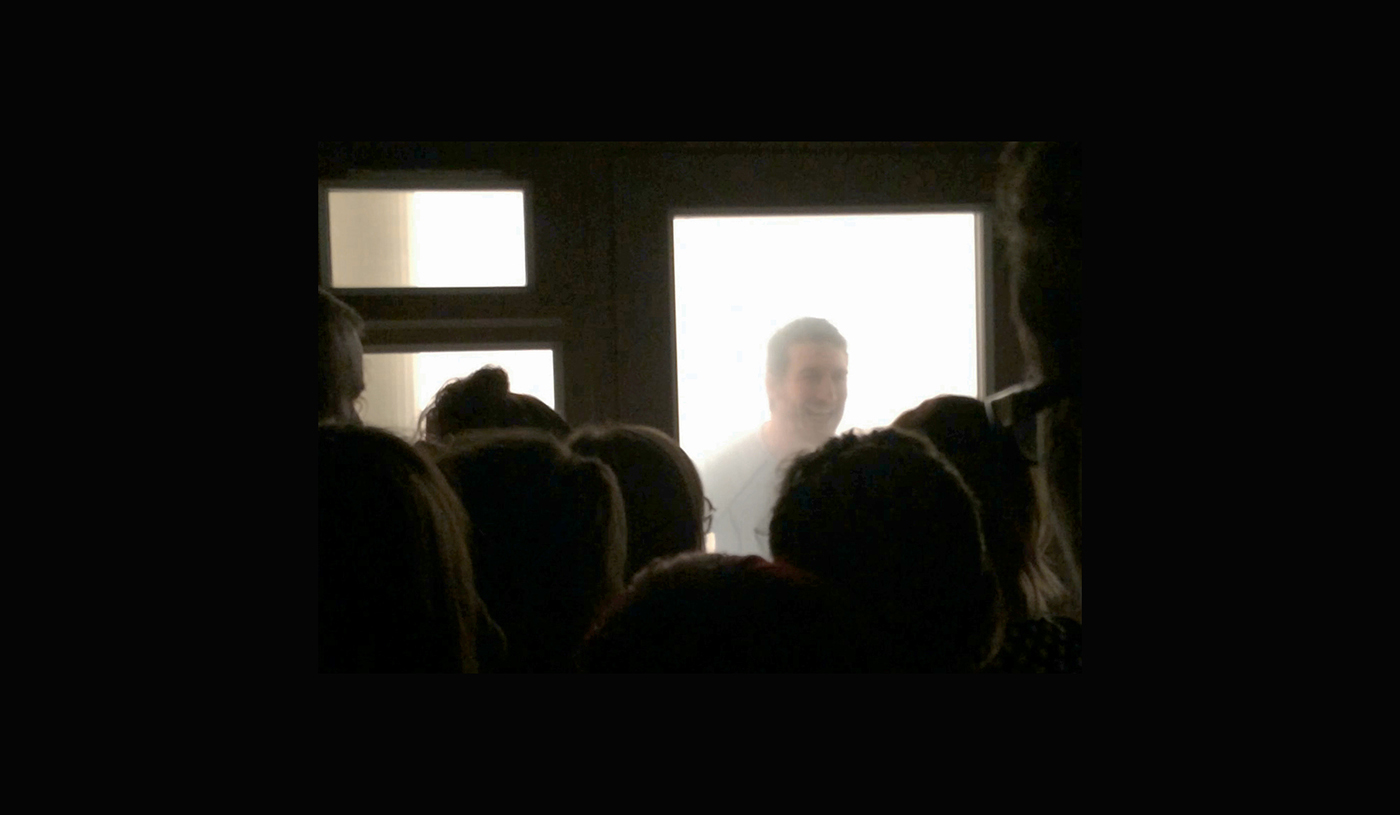 ‘East London is really dry now’. Staying south-east, artist group Cheap Drinks embodied the Peckham consensus as an area where young artistic activity is, and can still emerge, utilising a family-member’s van and surrounding parking space to host a show of work by 20 artists. A steady audience afforded by the unusual exposure brought by the coverage in the Evening Standard, Poppy and Meg, pictured, epitomised the culture of Art Licks, platforming nascent projects and recently-formed ideas to a wider audience remit, and though the artwork on show wasn’t all that interesting in the context of a group show, the opportunity to talk with artists embracing an extent of uncertainty, all weekend in a carpark, should be encouraged just as much as the clean and safe environment of the gallery space.

It is telling now, when looking at the Art Licks map of participating spaces over the weekend, where the concentration of activity is currently occurring. Obviously, this is not truly indicative of the distribution of artist-led projects around the city, many of whom were open but not participating in this year’s iteration, for one reason or another. Several spaces too were pop-ups, or less regular projects making the most of the peak audience footfall for one weekend. Peckham however, has been the center of much debate around gentrification over the past 2 years or so, with many accusatory reports blaming not just artists, but carpark bars and other independent pop-ups and eateries, as the cause of inflating rent prices and forced eviction of existing communities and family businesses. 38b noted that when they first started exhibiting in their flat 5 years ago, Peckham was considered ‘outside of London’, there not yet being an overground line direct to Peckham Rye. Recent projects, such as Alex Frost’s exhibition ‘Property Guardian’ at Flat Time House politicised the living conditions of artists in a culture of property speculation, after residing at the Peckham-based gallery / home over 6 weeks. The conversation is rife, but needs to be acted upon if artists are to resist the Vyner Street commodification or cultural cleansing of Shoreditch. 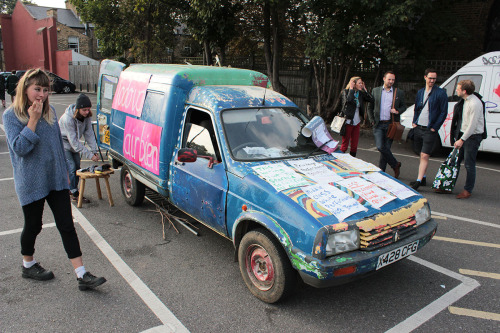 The art festival as a strategic model is becoming increasingly popular, particularly across regional cities looking to attract and promote cultural wealth and investment. Outside of London, these weekenders, monthly tours, or festivals function more succinctly from personal experience, as events and places of congregation, and thus community is more concentrated. The expanse of London leaves audiences stratified, and events inevitably clash with one another. A recurring disdain was brought forward by the gallerists, who bemoan about the fact that they can’t be loyal to one another, restricted by the duties of their own spaces. It’s hard from an audience’s perspective to quantify the reach of such a weekend, other than semi-informative social media threads. I wonder whether some of the apparent modes of artistic presentation and production brought to the fore by the Weekend could in the future be galvanised through a centralised focal point, either as a space to enable dialogue, particularly between the galleries, or somewhere in which it felt like the city was uniting, even if only temporarily, in principles, and thus reason for celebration.