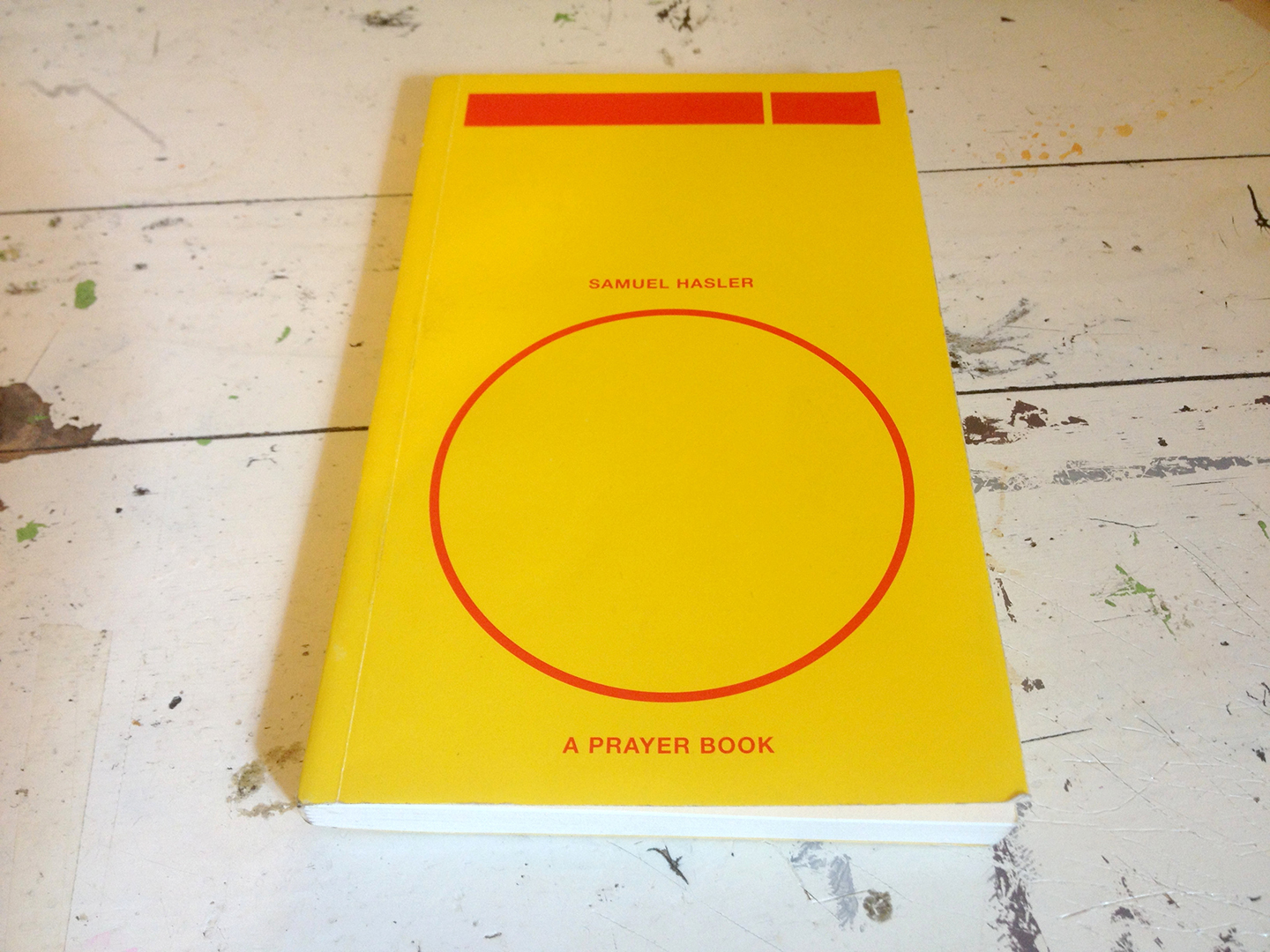 Published in Spring 2014 by Book Works, Cardiff-based artist Samuel Hasler’s O; A Prayer Book is his first major volume of writing. The work is a potentially semi-autobiographical collection that “operates as both a story and as a material context for a body of work; a spine connecting performances, readings, installations and printing.” A disparate collection of outputs litter this volume then, producing a feeling akin to reading a lot of Burroughs, the dawning sense you’ve read, or heard, the words somewhere else before. Having seen Hasler perform readings a number of times over the last few years, featuring sections of text to later become part of the book, it made for an uncanny experience throughout.

The work has an opaque thread running through it, binding together the collection of stories. Each of the three main sections of writing is set in a different city, moving from Cardiff to Moscow to Venice, with two vignettes in-between. One of these vignettes takes place in Pablo Picasso’s studio, with the other being a pastiche of the Italian literary genre, ‘Giallo’, a crime and mystery genre known for it’s abundant use of violence and eroticism, itself originally born of Italian translations of British and American mystery novels. However, the drive of Hasler’s work here, the narrative tension which weaves through each of these cities is not the unravelling of a mystery towards it’s tentative climactic reveal, but rather both the reader and Hasler faced with the very lack of such a drive or motive.

“If only I could write the wild epic love story. The adventures that I crave… I’d give anything to write the love poems that would elevate me in the tearful eyes of the critic. But where would it come from? Nothing is happening. Not even dramatic failures. Just nothing. Just failure of substance. Failure of care. Failure of meaning.” P64, Hasler, ‘O; A Prayer Book’, Book Works

Even the Picasso vignette is beseeched with inadequacy, as Pablo, with horror in eyes, comes face to face with Kazimir Malevich’s ‘Black Square’ painting.

There’s an aimlessness to the narrator’s travels, he ponders what he’s doing in each city, questions the lack of narrative drive, and in turn worries this lack is born of his own creative incapacity. The faint glimmers of dramatic action that do flitter into view, for example at one point he believes he’s being tailed by the secret police - necessitating a double bluff to counter their (imagined) suspicions - provide sudden moments of respite, sweeping the reader up into a familiar flow of fiction. However, this narrative momentum is just as quickly dissipated, dismissed with a wave of the narrator’s hand as the mirage that it is. And this push and pull of wanting to invent a story, maintained by reader and writer in equal measure, the desire to be carried along by comfortable and comforting genre-tropes, whilst knowing their fictitiousness, the base-fantasy of convention as an escape from the real, reoccurs throughout the work. As this chase-scene comes into the light as the lie that it is, however, we are returned to something else, something like a more honest iteration of events perhaps, and it is this movement between these two poles that in fact gives the work it’s drive.

At times I was reminded of the opening few pages to Henry Miller’s Tropic of Cancer, “There are no more books to be written, thank God. This then? This is not a book. This is libel, slander, defamation of character. This is not a book, in the ordinary sense of the word. No, this is a prolonged insult, a gob of spit in the face of Art, a kick in the pants to God, Man, Destiny, Time, Love, Beauty…what you will.” (P10 ‘Tropic of Cancer’ Henry Miller, Harper Perennial, 2005)

But Hasler is far less bombastic, for this doesn’t feel like merely a doubt of the form, a recognition of the endgame of the genre, but rather feels born of a deeper, more personal doubt, existential in its timbre, and is all the more disconcerting for it. 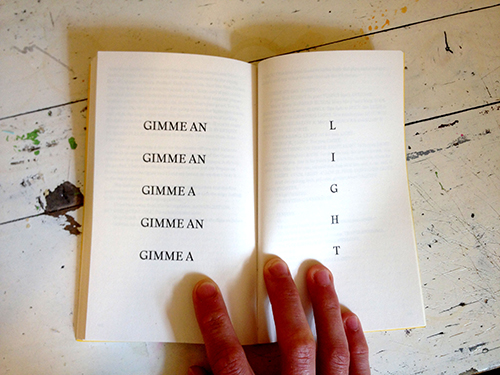 The work begins with a series of prayers, starting with a deceptively standard idiom, “O Heavenly Father, God of Love. Pray, hear small voices… Pray, hear this voice”, what begins to emerge more and more is a kind of détournement of the genre of the prayer. As Sam asks more and more of the divine creator, his demands become increasingly brash in their transparent desires, “Pray, Spirit, come to me. Become Love through me. Take this wretched body and become pure manhood. Take this wretched vessel and overflow with power and mystery. Take this wrecked ship after dark and joyride till dawn’s crash.” In a fabulous crescendo of absurd demands, self-critique, questioning and abandonment of faith, all aimed at the silent interlocutor of the Holy Ghost, Hasler sets up this internal dialogue of existential doubt, and the narrator’s ensuing resolve to tackle it head-on, which carries through the entire book.

The book itself has been designed as a reduction of the formal elements of the Mondadori published series of Giallo novels, with their distinctive design: yellow cover with a large red circle in the centre. Inside this circle is often an illustration of the intrigue contained within the book, a scantily clothed seductress training her gun on an unseen assailant, for example. But with Hasler’s book, this central circle is empty, both becoming the ‘O’ of the work’s title, and hinting at the further lack of genre-prescription ahead.

Returning to this idea of the book as a “spine connecting performances, readings, installations and printing”, the main criticism with O I have is how it all hangs from this spine. For, though there are thematic similarities between each section of the book, there doesn’t quite seem to be a central concern binding all the different segments together. Though I strongly suspect there is one, to me this connection felt opaque, I was left wondering what the connection was between Malevich’s ‘Black Square’, Giallo, unrequited lustful desire, and a paranoia of ability. This results, at times, in the suspicion that this is, in fact, a collection of disparate pieces of writing, each coming from different places, with different drives at their heart, posthumously knitted together. Read over a period of time, in fitful sittings, I don’t believe this would cause much of a problem. However, when read intensively, consistently, this suspicion gnawed away in the background, not overly distractingly I might add, as each section of writing had enough propulsion, delight and existential despair to keep my eyes from peeling away, but enough to raise it as a question, and personal reflection, here.

Early German-Romanticism had the notion that the novel’s only specificity of genre was as a hospitable space for housing other modes of writing, a hybrid form bringing together the epistle, the theatrical script, the poem, song, and prose - with Don Quixote as the exemplary example the novel’s hodgepodge existence. Hasler’s book contains many such deviations from what we now find to be the relatively strict novelistic form. And perhaps this is a key point in looking at this work: form, and genre. Art writing would seem to be the label such a work as Hasler’s might take, but since its inception as a form or label in and of itself, it’s never quite been clear what the traits under this heading exactly are. As John Douglas Miller, in a recent article in Art Monthly noted on the ‘art’ part of the label Art Writing: “was it to do with writing that had to depart the world of literature for the world of art because it was unable to… find funding or critical traction in the realm of literature?” (p10 Douglas Miller, ‘Art/Write’, Art Monthly April 2014). Leaving aside the bias Miller implies with the term ‘critical traction’, I would agree it may have been a useful term in the pursuit of finding a home for experimental writing, after the Nouveau Roman tradition was fenced off and quarantined as little more than an historically novel literary experiment, outside of the traditional distribution circuits of literature. And, in this sense, we can only be thankful that works like Hasler’s, even if they don’t fit neatly into such a notion as either ‘novel’, or ‘art writing’, have a platform.