This Inferior Mirage is Sebastian Jefford’s second solo show to date, and marks an interesting development from the body of work that made up Records of Garden Keeping, presented last year at Works|Projects, Bristol’s only commercial contemporary art gallery. Cactus, the Liverpool-based gallery presenting This Inferior Mirage, is situated within The Royal Standard’s newly extended wing of studio spaces, and represents it’s inaugural exhibition. It feels a serendipitous sighting for This Inferior Mirage to be shown in Cactus, and not purely for the nominative association. The space has been painted a sandy peach colour, with the floor laid in vinyl patterned like a tight grey and light yellow marble, the two together making for an almost cartoon representation of an arid landscape housing Jefford’s sculptural works.

Cactus has a large row of windows along one side of the gallery space, looking out on a skyline of dilapidated, sometimes squatted industrial brick buildings, and then further out the jutting specks of metallic office-blocks or flats. The end of one era and the probable death-throws of another filter through into the space of the work, an establishing shot, or prologue of sorts. 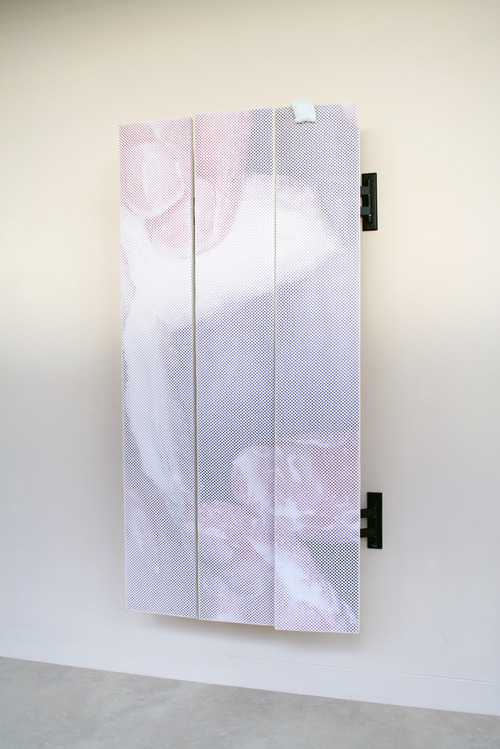 This Inferior Mirage, install shot. Image courtesy of the artist, 2014

In conversation Jefford mentioned an interest in both ‘in-situ’ museum displays (cartoon-like in their simplification of forms) and children’s toys (abstracted - block-coloured - representations of objects devoid of nuanced detail), and I found it completely impossible to shake this from my reading. The sculptural works littering this abode (sticking to the riff of this metaphor) form a kind of Apocalypta-Chic, the Ikea show-room display of a post-consumer-society desert dweller’s home in the end of days. A small metal grill latticed with thinly rolled pieces of sand-coloured plasticine might be a bed lain with animal skin. Two dark-green bowls might form primitive drinking cups. The melted remains of what were once moulds of trainers - possibly the result of a botched repair job - lie limply piled like wearily discarded shoes at the end of a day. On the walls, mounted on television brackets, like the last remnants of a by-gone consumer culture, hang prints of what might be cartoon representations of hands (an absurdly nostalgic sanitised depiction of manual making?), though it’s difficult to know for sure as they’re wrapped in a latticed veil made of the kind of non-slip spongey material you might use to line a drawer. This Inferior Mirage could almost be a museum display for a future yet to come. I cut to a shot panning slowly across the desert planet of Tatooine, fading into the confines of Luke Skywalker’s home, with it’s confluence of holograms, hover-crafts amidst a humbly primitive habitat.

A text accompanies the work, penned by Jefford, with a story that has just enough in it to potentially precede or proceed the remnants of this setting, like the stage around which the story performs. In fact, the theatrical metaphor seems even more appropriate given the ‘suspension of disbelief’ required to populate this space with the story. One line from the text reads: “He scans his surroundings, and finds himself, and the Big Beige Things, in a boundless desert, devoid of any flora or fauna” providing a slightly mis-registered visual referent for the space and objects I’m in the company of. Although the prose reads a little clunky at times, the performative intersection of text and physical installation provides a playful method of approach for the viewer. 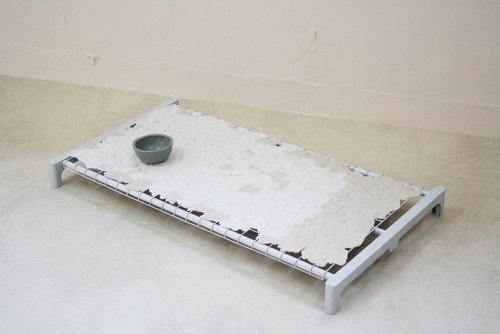 This Inferior Mirage, install shot. Image courtesy of the artist, 2014

In the trajectory of Jefford’s practice the show feels like a nice development from an earlier inclination towards surfaces. It felt like a consistent refrain within Records of Garden Keeping, with objects featuring bright colours, camouflage-like patterns, packaging material itself; what I might term ‘the surface of the surface’. This Inferior Mirage feels like it’s moving on from our very contemporary ‘Pop’ obsession, towards a complication of the surface, an inspection of the fissures in it’s dry and cracking skin, and the mirage hovering on surface’s very aridity; the surface has been made difficult to read, which inversely invites reading, and visions, rather than simply playful gestures towards its depthlessness. It is also an enjoyable progression to see, rather than merely presenting a collection of objects, the formation of a more fully-realised environment and accompanying text, a context and setting in which these objects are activated. The sculptures and wall-pieces themselves, although sharing a similar colour palette, avoided, for me, a potential disparity they may have risked in relation to one another precisely through being encompassed within this ‘habitat’, the environment welding them into props for the performance of this wider narrative.

Disclaimer: I know Sebastian, I am not approaching his work without some knowledge of Sebastian himself. My view of his work is irrevocably bound up with my meetings with Seb, in short conversations, or flippant comments about his work, and with my knowledge of his previous shows. Hopefully though, this does not completely preclude at least a sense of objectivity (whatever that may look like), the aim here is still to approach (though ‘stalk’ is perhaps a better word) this abstract notion of ‘criticality’. I would like to note as well that this is the first of Doggerland’s reviews, and in this way is a part of the wider project of Doggerland, coming as it does before we’ve penned anything like a definitive editorial stance, at an openly formative stage in it’s development. For that reason this review is but one strand of a wider conversation which is defining Doggerland’s borders.