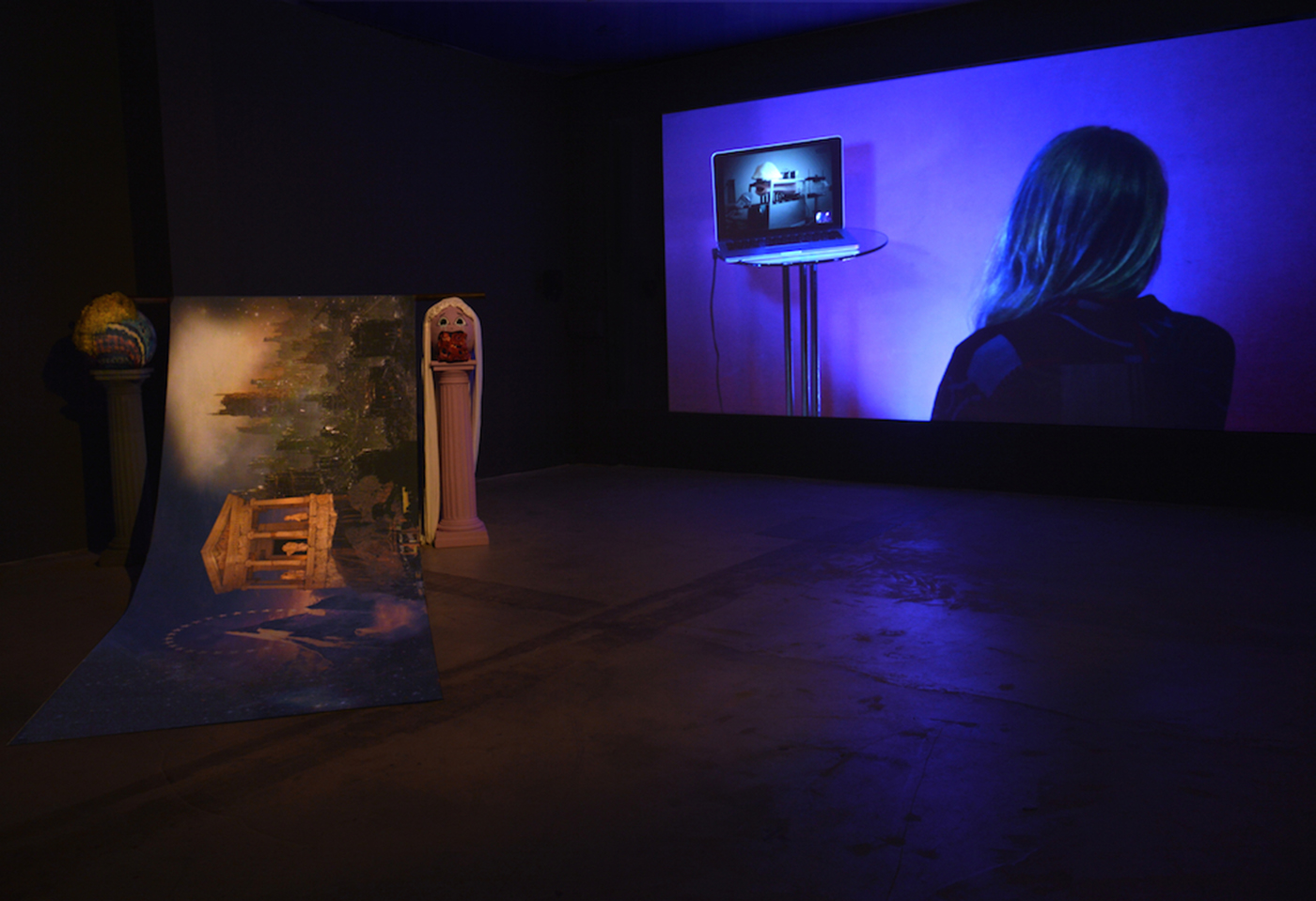 It’s strange reviewing shows featuring a large quantity of contributors at the best of times, with issues of timing and page-space enforcing a schizophrenic approach. It’s difficult to know how to give and sustain an analysis, with the easiest option being to just admit defeat and focus on your favourite. To complicate things slightly further, Exta>, shown at Res., (featuring work by Dark Creatures, Michelle Hannah, Lewis den Hertog, Emilia Kurylowicz, Stuart Middleton, Eva Papamargariti, Tai Shani, Gary J Shipley, and Craig ‘VI’ Slee, and shown as part of both the Art Licks Weekend and Deptford X) is the first iteration of a research project, thus forming the sketch or trial-run of a proposition. This immediately raises the question of how to approach a preliminary suggestion, this stop-gap within ‘an ongoing research project by Lucy A. Sames and Dane Sutherland’, i.e. should we afford the work leniency in its definition as research in distinction from exhibition?

From the press release: “[Exta] presents the untimely vision of a dank sludgescape populace that is disoriented, corrupted and feverishly fucked; new flesh, new territories, and new headaches…” Reading, deliriously, more like an esoteric doom-core record label’s press-release than the promo for a contemporary art show, in some ways this music reference feels apt. At its best, Exta comes across as a cultural cross-section of time, our time, now. A lot of what’s on show here is, put bluntly, totally ‘on trend’, or as Steven Shaviro claims of the inherent expressive ‘…ways that they (recent film and video works, and in particular cinema and music videos) give voice (or better, give sounds and images) to a kind of ambient, free-floating sensibility that permeates our society today, although it cannot be attributed to any subject in particular.’

Exta is essentially a video programme, comprising a large single-screen medley of moving-image material made up of music videos, film clips, and moving image work. Other than an unfurling sculpture by Tai Shani, the gallery is sparse, dark, and primarily concerned with the procedure of the films, not the accommodation of audiences (there’s no seating). That said, the running time of over an hour is pacey, and equally humorous and disturbing enough to find difficulty in pulling away from the ‘…anabolic fibroproliferative mess.’

In Emilia Kurylowicz’s piece, Robot Mouth (2014), computer-tech prosthetics and the artist sing a disconcerting duet. The strange fleshlight/worm-mouth-form of the voice synthesis is attempting to phonically reproduce the artists reading of ‘Ave Maria’: “Blessed is the fruit of thy womb…” as a technological-becoming replacing the Christ-child. Tenderly spoken over a soft melody, the work has a lullaby quality, with the artist bestowing maternal care on this technology - encouraging and coaxing it - as if it an infant in the throes of replicating speech to learn our language. Frankenstein themes abound and appear starkly prescient, standing as we are on the precipice of AI’s genuine formation.

The interaction with transmutative bodies switches, as the act of passing onto a foreign body in Kurylowicz’s work is repositioned as a channeling through in Michelle Hannah’s rendering of herself as alien. With milk-white contact lens, in a setting strewn with dust, or a myriad of solar systems, she intones the first verse of David Bowie’s ‘Cat People’, her first line “See these eyes so black” no longer referencing the ‘green’ of cat eyes, as the abyss of the cosmos is now reflected in the soul’s window. Hannah manipulates her body and appearance in similar manners to Bowie, but also that of Laurie Anderson or The Knife. Her appearance is androgynous and her voice pitched so low to be almost beyond any identifiably human-register. 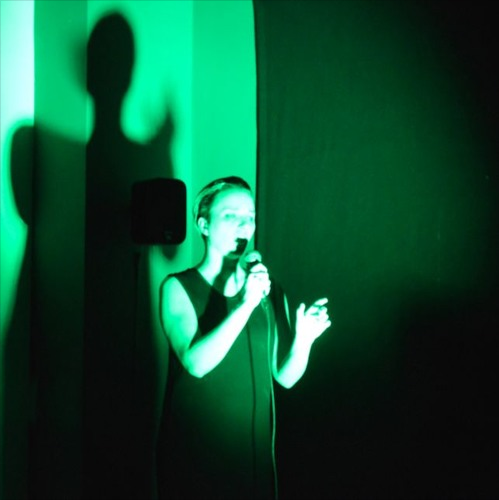 Recalling another contributor, Arca, a male producer whose polygendered alter-ego, Xen, often appears (as in the video presented here) digitally mapped over and enshrouding Arca’s own dancing figure, allowing him to inhabit and embody other genders. The strobing white flicker offsets the nude female body against a dark backdrop, reminiscent of Shaviro’s example (again) of Grace Jones’ Corporate Cannibal. Both transcending a physical bodily structure, as limbs and features merge, smear, twist and stretch, Jones’s image defies an engendered reading whereas Xen remains visibly female, before going through a state of animated metamorphosis. As Arca says: “It’s about resisting labels and integrating different sides of ourselves. The complicating of one and the other is very fertile…" Returning to Michelle Hannah’s work, it feels like this ‘other’ is nothing so definable as another gender - even if there is again a nod toward Jones’s low voice and iconic androgyny - but the lightless infinite cosmos itself.

Midway through the screening is the work Protein Shake (Episode 1) (2014) by Lewis den Hertog; an intensely confounding video work, making for ethically questionable, secular and perversely masochistic viewing. Solipsistic monologues are delivered by a montage of stuffed cuddly toys, one by one they express resentment, loss or incomprehensible insignificance through scientific fantasies, stoned existential ramblings and apocalyptic desires. All male, mostly from the US, this content appears to derive from the ‘camera confessionals’ of Youtube. Recalling Beckett’s abstracted mouth in Not I, these rambling mouths are singled-out, organs without a body, each superimposed onto the faces of soft toy-bears that lie dormant in the background scenery of ‘cam-girl’ footage. Again, chiming somewhat with Kurylowicz’s piece, this infantile innocence is cast amidst a dawning abyss of the future, a future without God’s faithful moral compass, in a maelstrom of digital realities.

The bears, limp-sidekicks to digital sex-labourers; both male voice-over and female performer address an unseen online audience, often only present as potential, the potential to be heard, to be witnessed. This commingling of found footage is cropped and zoomed to slow-pan in on the bear, like the dramatic part of a talking head interview, marginalizing the female in each scene, as it incessantly obscures each of their faces. This slow structural repetition, hazy resolution and slurred drone score, paired with the content of the image source and message, poses ongoing ethical questions. The inert effort involved in recording the different streams, issues of consent, and objectification of the women for the purposes of production and distribution within the artwork, also online, are frighteningly apparent upon viewing. The disengaged relationship den Hertog, establishes with the women is analogous to the dead stare of the toy’s eyes and inert posture.

The existential questioning of the men undermines the innocent appearance of the cuddly toy, itself but a prop for the women’s mise-en-scene, playing out society’s conflation of schoolgirl and sex-godess. Is den Hertog trying to implicate a comparative link between the male expression and female labour, in a manner of exposé, or simply signaling to the depths where diversion leads us through digital relief and desire? Watching a bear articulate its attempts to let go of the shackles of imposed (human) morality is reminiscent of many successful US animated franchises: Family Guy, American Dad, Ted. Den Hertog manages to amplify this sense of guilt often offloaded onto the anthropomorphised, black-comedic character, enabling us to recursively comment and mock societal trends and our own shortcomings. However, in some ways the piece works best when it lets go of the more clearly ‘dark’ drones of the soundtrack, which seem to be casting a scathing light over both female performers and male monologues, in favour of a more ambivalent ambience, less ‘doom’ in tone. It’s precisely in these moments where it felt possible, even encouraged, to view this material outside of our own moral compass, as just one view amongst others, one occupation amongst many.

Interjecting the programme, Dark Creatures' Dark Creatures is essentially a trailer for a forthcoming project still in development. A pseudonym of Joey Holder, Dark Creatures is an accumulation of digital renders, ripped video sources and stock imagery, compartmentalised across several research domains. Informed that Exta will be restaged and expanded in Scotland next year, I can’t help but feel Dark Creatures’ contribution to the exhibition as a conceptual whole a little thin. Similarly, Blanck Mass’ Dead Format felt somehow out of place. Although tonally resonant, it just didn’t feel like the piece added anything to the shows thrust; both contributions sitting somewhere outside the cross-referential rhythm generated by the metamorphic body-politics of the other works in the programme.

Far from speculative futures, collectively these works throbbed with a nexus of issues and impulses prescient to our present. The world is strange, but it’s amazing how little of its strangeness seeps into mainstream visual culture. This is why, in an oddly inverse way, horror and sci-fi can feel so reassuring. The collected works’ strength of conviction, combined with such compelling imagery, meant that in the best of ways Exta offered up a useful body of material in this regard, it provided ventriloquial voices for the mute face of the present, reassuringly unsettling.

vapid.slather.swells.the.wet.haven. is the next iteration of Exta and will take place between London, Aberdeen and Orkney throughout 2016.