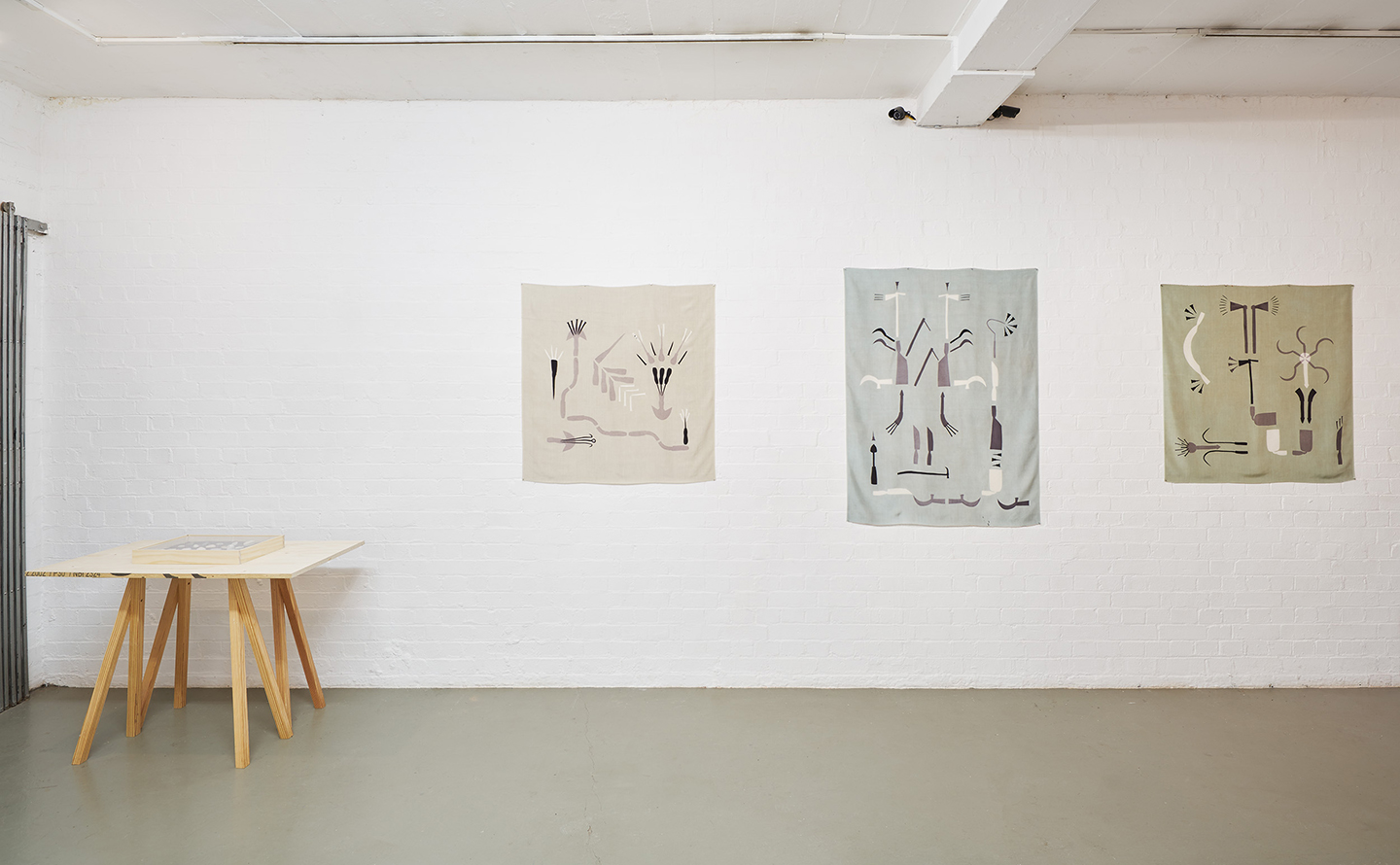 Laura Davidson looks at the critique of hierarchy in the workplace within contemporary art, whilst reflecting on the questions brought forward by the exhibition The Workers, and talk by the exhibiting artists at Standpoint Gallery, London, earlier this year.

A modest white dusty shelf was mounted onto the wall at Standpoint Gallery, the objects removed to reveal crisp white shapes, betraying the obsolete length of time they had been lingering on the surface. The layer of protective glass on top of the shelf however, suggested that something was amiss. The dust had not floated down upon this shelf over years; it had in fact been constructed by human hand. A mêlée of tiny, precise pencil flecks, mark out the boundaries of objects, which we will never see. This dust is illusory, Untitled (2016) has been generated by hand, by the toil of human labour. The list of works attributes it to the artist Susan Collis. Her name verifies the paper, pencil, glass and Formica as being a result of her lonesome artistic labour. Elsewhere, illustrations of objects are arranged in an orderly fashion on a triptych by Caitlin Hinshelwood. Taking inspiration from displays of tools in museums, drawings of curious implements are placed in eccentric yet, indexical form across the three mutely coloured silks. If this were a conventional group show of shared concerns between artists, then the visual relationships between Hinshelwood’s silks and Collis’ shelf would be interesting in their own right. However, The Workers has a gentle undertow. All the artists have at one point during their careers worked with Collis in her studio as assistants. So, it is more than likely a community of hands have worked to create Untitled (2016), from buying materials, to executing the work and during its installation process.

Despite the romantic illusion, the artist does not manifest her ideas in isolation. Lucy Clout’s Bob Weight (2011) is hung within a short distance of Collis’ meticulous dusty shelf. During a talk to accompany the exhibition, it was said that the act of sharing in Collis’ studio inspired the work of the assistants to varying degrees, by either strengthening the skill set of the assistant, or by rebelling against Collis’ acute attention to detail and craft. Clout made a funny remark about how she had chosen to exhibit a less than perfect item; cheap Argos catalogue-esque earrings mounted on a collar of roughly cut paper. The discussion posed questions to the artists about hierarchy and influence in relation to the artist and assistant(s). It did appear that the only hierarchy present at Standpoint was academic in nature; how the work included sits together intellectually and materially. However, just as the The Workers was not conceived to present to us a master and her disciples, it wasn’t just a group show of shared concerns. There were strands of both ideas present. The artists talked about the sharing of skills, ideas and humour within the studio. It sounded like a convivial space as opposed to a space that was instructional and linear. Collis even mentioned that it’s possible some of the artists who worked as her assistants stayed for long periods because of these commonalities.

It is true to say that this atmosphere of sharing is reflected in The Workers; the use of and the imitation of textiles runs throughout Collis’ practice and it is without much surprise textiles were in abundance in The Workers. The aforementioned Caitlin Hinshelwood’s screenprinted silk work Hedger (2015) and Tamsin Casswell’s careful selection of colour and texture make up the abstract and embroidered textile panel Interior View (2015) facing out of Standpoint’s window onto Coronet Street. In both Hinshelwood’s and Casswell’s practices there is an emphasis on the exploration of craft and handiwork, something they share with Collis. Aileen Harvey continued exploration into these ideas with Found Alphabet (Corfu) (2013); a beautifully placed collection of stones resembling pre-linguistic forms, reminiscent of the kind of display found at Oxford’s Pitt Rivers museum. 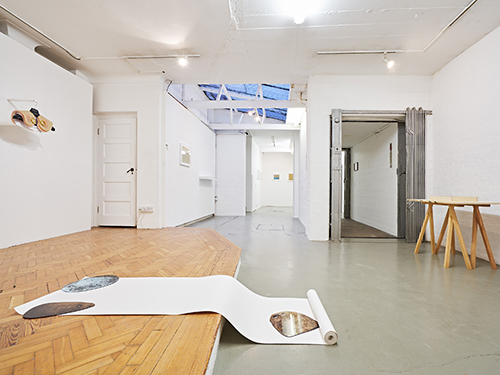 As you walked around the gallery, looking at the work and listening to the artists talk, it was hard to imagine a hierarchy between them. Kate Morrell’s Pots before Words (2014) was one of the last works you would happen upon, featuring forms created out of Jesmonite mounted on red board, which spatially felt like a curatorial return to Harvey’s proposition in Found Alphabet (Corfu) of collected, almost archeological, stones. As Morrell’s work felt like a punctuation point, in the far corner of the gallery, these particular references to a discourse around archeology reinforced the wider collective interests of the artists. The Workers could be a show about the history of materials, objects and museums as opposed to the relationship between a contemporary artist and her assistants. Yet, it is the title of the exhibition that subtly undermines the idea that the show is only about commonalities. The Workers implies a collectivity and the question I kept wanting to ask was ‘who are the workers?’, as if they were a mythologised hidden people. ‘The workers’ implied a different group of people, separate from the artists showing. As if artists and art are removed from labour and work.

It was revealed that in fact, hierarchies manifested themselves when work was taken out of the studio. There, the idea that an assistant could have another, different, art practice was not necessarily considered by the institutions or individuals engaging with them. The assistant becomes an employee, someone who performs a vocational function in relation to an art work. Someone who installs a piece, just a pair of hired hands. Collis remarked that when she herself is installing a work for a collector, she feels like the collector is having the builders in. This opened up the idea that somehow the presence of the artist making their own work can be considered a nuisance or inconvenience. The crux of this feeling, Collis thought, was perhaps that her presence interrupted the sense of the holy, otherworldly art object. The collector wanted the aura of the beautiful thing without any knowledge of the labour put into the object. So again, our expectations of hierarchy within the studio and art practice shift. To the owner of the work, the object sits in splendour above the labour used to produce it; whether it by the artist or her assistants.

It can be hard to ignore discussions about hierarchy in art practice without considering art history’s less than inclusive relationship with race, class and gender. When the artists were discussing the hierarchy of negating their own practices outside the studio, Rita Donagh’s piece Slade (1980) came to mind. On Donagh’s first day of teaching at The Slade in the 1970s, she was mistaken for the life model. Assumed hierarchies were acted out upon Donagh’s body merely because of her gender. Slade wryly comments on this; with Donagh posing nude and her hand angled as if holding a paintbrush. She performs her assumed identity alongside her actual identity. It is worth noting that this work is an exception in the oeuvre of Donagh’s, as her practice is mainly considered to deal with the troubles in her ancestral homeland of Northern Ireland. Hierarchy visited her and not the other way around. The Workers did not make such a political point as Slade but, it does fit within a discourse about who we consider to be someone with hierarchal ‘importance’ (and indeed what importance means) within the broader art world context. Certainly, when we consider art engaged with hierarchies there are many fine examples where women sought to dismantle hierarchies in an art world historically dominated by men. 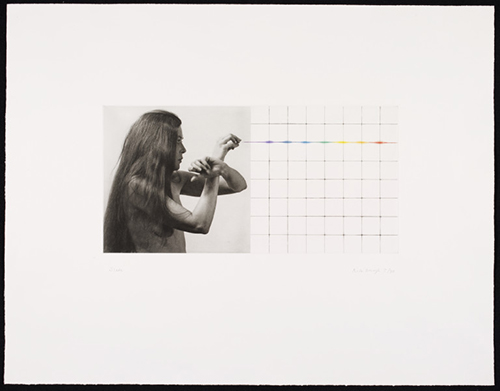 Given contemporary art’s relationship to the ultra wealthy, it is unsurprising that revealing the labour practices of a precious object is not, within certain art contexts, desirable. It could be likened to the process of concealing the appalling sweatshop labour that major brands go through to protect the sheen of their gilded products. Collis indeed stated that during her MA she had been reading Naomi Klein’s No Logo (1999), which discusses this practice. However, it is evidently clear that this kind of exploitation of labour brought into the world by globalisation is obviously not what is happening in Collis’ studio. It is neither the lavish spectacle of labour brought into David Zwirner’s New York gallery space by Oscar Murillo in 2014. A Mercantile Novel saw workers from the Colombina chocolate factory in Murillo’s hometown in Colombia transported to the gallery floor, where himself and four generations of his family have worked. In a contrast to The Workers, the workers in David Zwirner performed their well-rehearsed vocational tasks, without a nod to their identity outside the factory. Murillo’s workers weren’t necessarily seen formally as assistants, as they are positioned to perform as part of the aura of the art on display. For Murillo, there was an emotional and biographical connection to the factory, as his father’s work papers were framed and displayed alongside the conveyor belt of chocolate. He sites the working practices of the factory as an influence on his own working life in an interview almost a year prior to the exhibition: “[…] a labor intensive factory situation — very much exemplifies my studio practice, not in the Warholian sense of mass production, but in the attention to firsthand involvement. In fact, this specific example is a very personal one: the people in the factory and its history are very closely interwoven with my growing up.”[1] In Murillo’s case, you can see the inspiration of the factory/workplace running only one way - directly to the artist genius himself. By exhibiting as artists with shared interests and individual identities, The Workers removes this kind of supposed top-down workplace hierarchy. 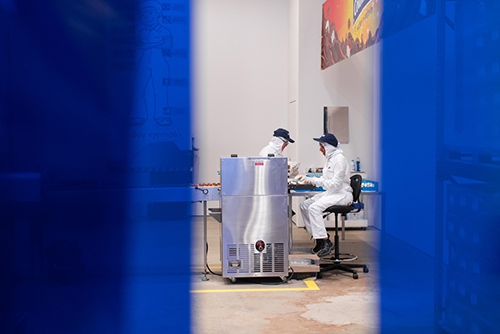 All of the practices represented in The Workers come across as a coherent whole. As previously mentioned, it could be an exhibition that solely puts forward multiple propositions about textiles, display, craft, detail, drawing or the museum. The title and accompanying blurb masks this, due to the nature by which the artists were introduced. An invisible layer of discourse about hierarchies within the studio of a successful contemporary artist hung in the air, forcing the viewer to decide whether or not the work was put together because the artists shared a workplace or because the contemporary studio can potentially function as a site of exchange, for both artist and her assistants. Although recalled with great humour, it was slightly disheartening to hear the idea that outside the studio, an assistant would be rendered anonymous and just an orbit of the artist whose name was attached to the object. By exhibiting together as equals, this challenged the flattening of individual and collective identities outside of the studio. The Workers confronts the idea of the artist as an individual genius but, is also emphatic in the idea that collectivity and sharing are integral parts of, not just art, but our entire cultural landscape. A knowledge we all implicitly know yet, still feel necessary to highlight within the current hierarchies of the cultural sphere.

Laura Davidson is a London based writer with interests in contemporary art and digital culture. Recently she has contributed catalogue essays for Sluice Art Fair, Slate Projects and Saturation Point. Her writing has also been featured by this is tomorrow, Rhizome, Imperica & COPY.