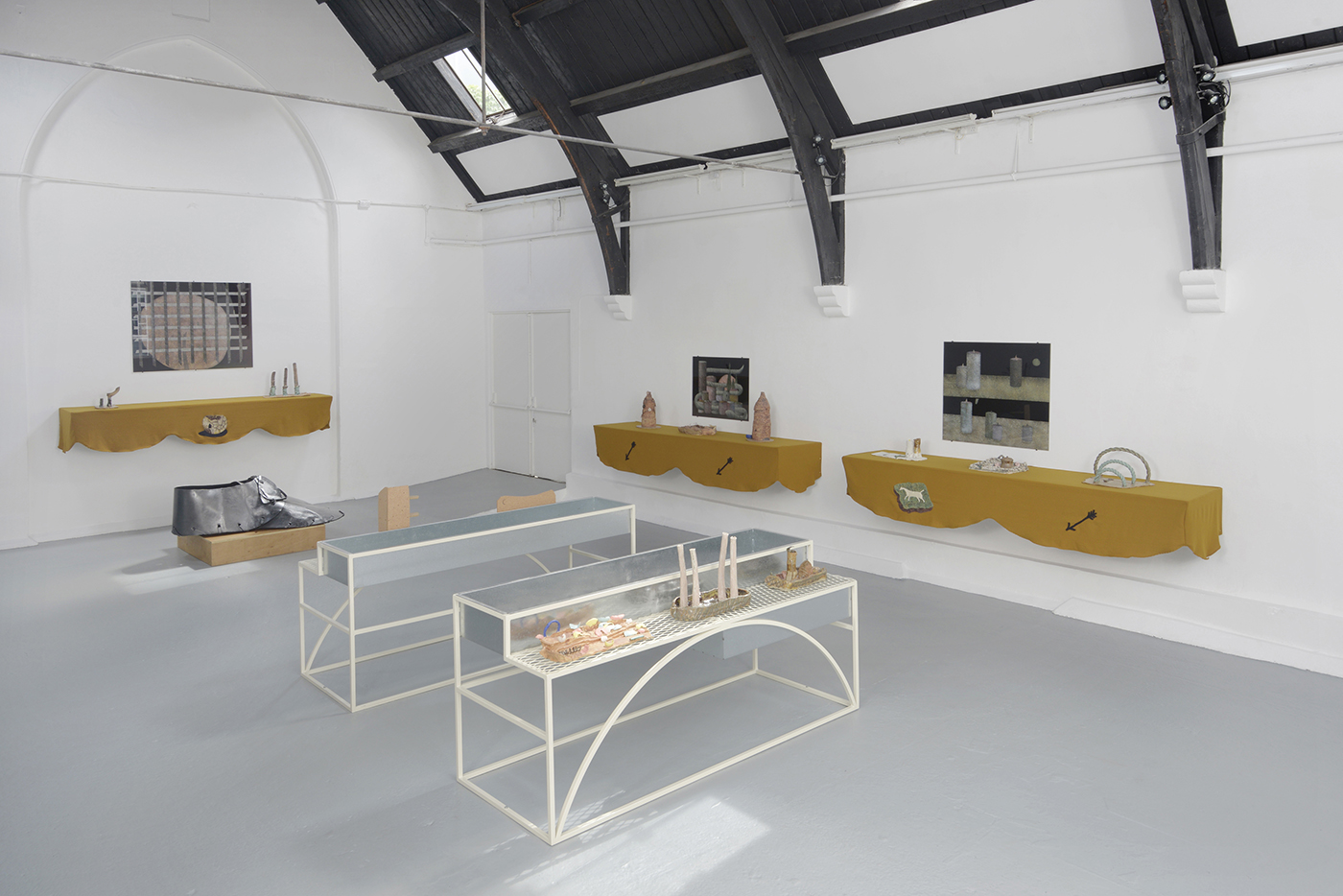 Past the foyer of artist editions - an impressive list of luminaries donating to the cause - Studio Voltaire’s main exhibition area, a repurposed Methodist church, is a roomy, light and airy space, it’s church-remainders - large windows, high roofed ceiling, black beams - add an impressionable influence on anything presented within its four walls. A ‘not-for-profit’ Arts Council England NPO, commissioning large-scale exhibitions, a handful a year, and operating a number of revenue-generating schemes (for example, the aforementioned editions, and their biennial temporary Christmas shop, House of Voltaire), Studio Voltaire still retains, a little tenuously, it’s definition as ‘artist-led’.

Aaron Angell’s show, Grotwork, commissioned by Studio Voltaire (supported by The Henry Moore Foundation, and the Arbroath-based Hospitalfield Arts), comprises a selection of Angell’s now trademark ceramics and reverse-painted glass, and more novel additions, cork sculptures, some large steel work, and knitted fabric designs. His ceramic work, in particular, walks a fine-line between an unskilled amateur-vernacular that sits outside of the mediums craft-traditions, and an all too knowing performed-naivety, belied by his caring glaze-work. Here though, perhaps through producing pieces on a larger scale, or just refining the specifics of that vernacular, you can revel in its detail, images, and thus nexus of ideas the work dances around. Via a relatively modest seduction, I felt enticed into the work’s world, and the almost visible threads of thought infusing it, the worlds it inhabits. A whole series of interconnecting and yet distinct motifs play across the surfaces of the various mediums within the space: eggs, snakes, mould, the Cherhill chalk horse, flowers, chimneys and that humble fibre-vehicle: sliced-bread. 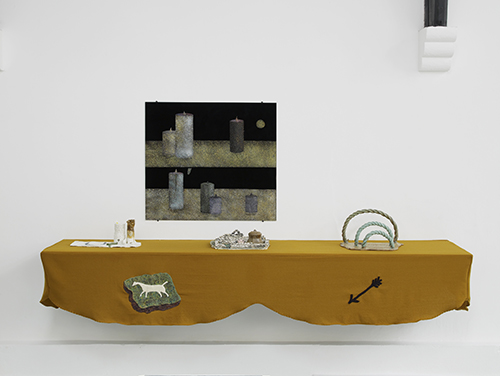 Riffing playfully off the buildings former history, the main room features a series of shrine-like, relic-laden shelves draped with a mustard-yellow fabric, into which are sewn some felt versions of the above mentioned motifs. The first shelf you approach is adorned with a collection of hygrothermographs (instruments for measuring the humidity and temperature of a space, mischievous invisible affects) stuffed with slices of white bread, from which lace-arabesques of luminous moulds are spreading into these archaic instruments. I misread the hygrothermographs as seismographs (an honest mistake I’m sure the best of us could make), and with this began a stream of thought I feel hard-pushed to let go of: the seismographs measuring the shifts of tectonic plates, taken over by bread to the point where no more measurements can be made, the moulding bread in turn crystallising into rock, short-term human history becoming long-term geology, a kind of bread-rock becoming. Although coming from a mistaken origin, the themes of transformation and growth feel accurate in their recurrence across the room. On one of the steel platforms within the show, a long narrow trough is filled with used charcoal remains, and the profusion of the flower (flour…) and chimney motifs within the work, sign-post bread’s route from grain to dough to oven to loaf, similarly mirrored in the chemical recomposition clay undergoes as it becomes ceramic when fired in a kiln. Added to this we find a whole series of ceramic boats housing chimneys, and, sewn into the mustard fabric, two eggs - one with windows, the other with feet - suggesting travel and transportation as further embellishments to the ideas of growth and material transformation. 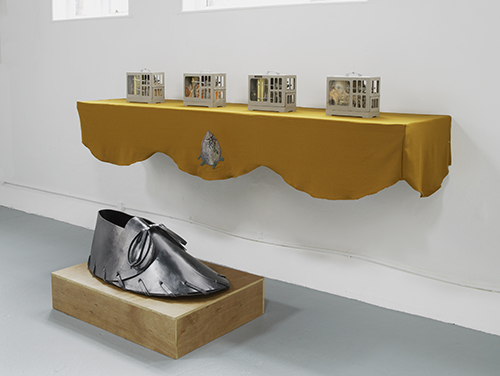 In the press release, Angell is quoted as saying he works from a “psychic compost”, and this feels wholly appropriate as a way of describing how the odd conglomerate of themes work together. One can imagine the Cherhill chalk horse festering with (another reference amongst the works) Bram Stoker’s final novel, The Lair of the White Worm, their collective mulching producing tendril connections: the white of the horse and the white of the worm, a folk-historical mythologising of the natural world suffusing both, etc. The interconnections, cross-fertilisations, and, at the same time, thematic mismatches across the works somehow function in a lightheartedly productive way, bouncing off one another, forming odd constructions like conceptual-Meccano. The incongruities are in some ways what made for an enjoyably playful viewing experience, readings not beholden to the hegemony of the press release; my mistaken identification of the seismograph perfectly acceptable. This is a rare ability. What feels particularly novel here is a shift away from singularly sparked ‘reference points’ used as markers towards wider stories (a regular occurrence in a whole world of exhibition making), to repetitious ‘motifs’ recurring in shifting configurations across the works, where no image feels discrete, no iteration definitive. 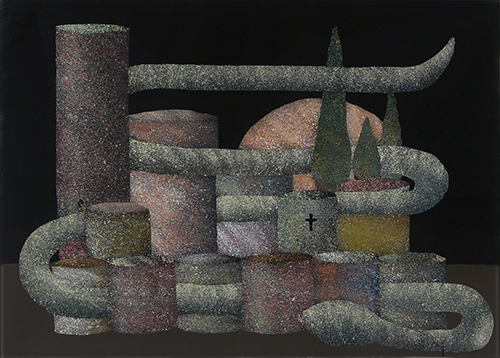 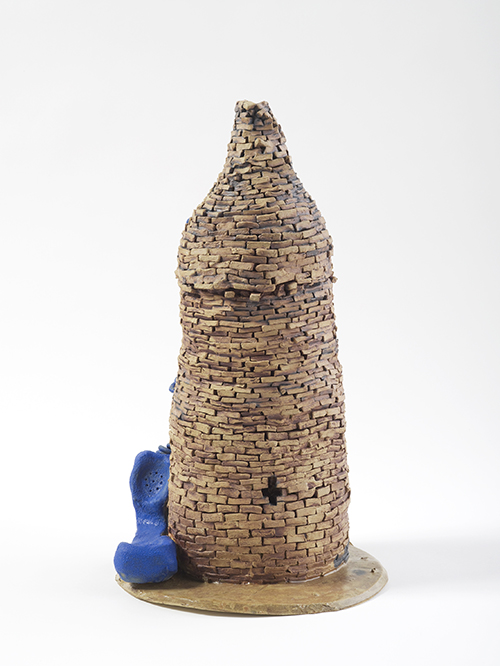 The two strands of production in the show that sit awkward are the small works with cork, and the large steel pieces. The works in cork felt too far in the direction of stylised-naivety, uncared for even, and the enlarged steel renderings of old-fashioned leather shoes struck a peculiarly ‘pop’ note that added nothing to the rest of the shows momentum (aside, I imagine, from potentially fetching a far higher sale-price than any of the other works, being both the largest on show, and made of a more durable, valuable material).

The strongest works within the show are easily what Angell is known for. The ceramics are a joy to revel in, engagingly detailed and gorgeously glazed. The brickwork on the chimneys throughout a real joy to look at, as is the acrobatic dexterity of the snake/worms suspended between pillars. The reverse-painted glass-works, also mould-like in their slow accretions of paint-spray and colour, cordially continue the show’s themes and motifs, making for a wider sense of the work’s cultural-body, whilst their images have an oddly subdued but confident quality, an interplay between their sharp lines and indistinct conglomerate-colourings. Together, its like watching a folk-tale morph with each retelling, as the whims of both medium and story-teller smooth out details, attaching new ones as they go, spanning across the two senses of the word ‘culture’: human culture (our myths, stories, and images), and microbial culture (that furry luminous growth sprouting from an out-of-date loaf).