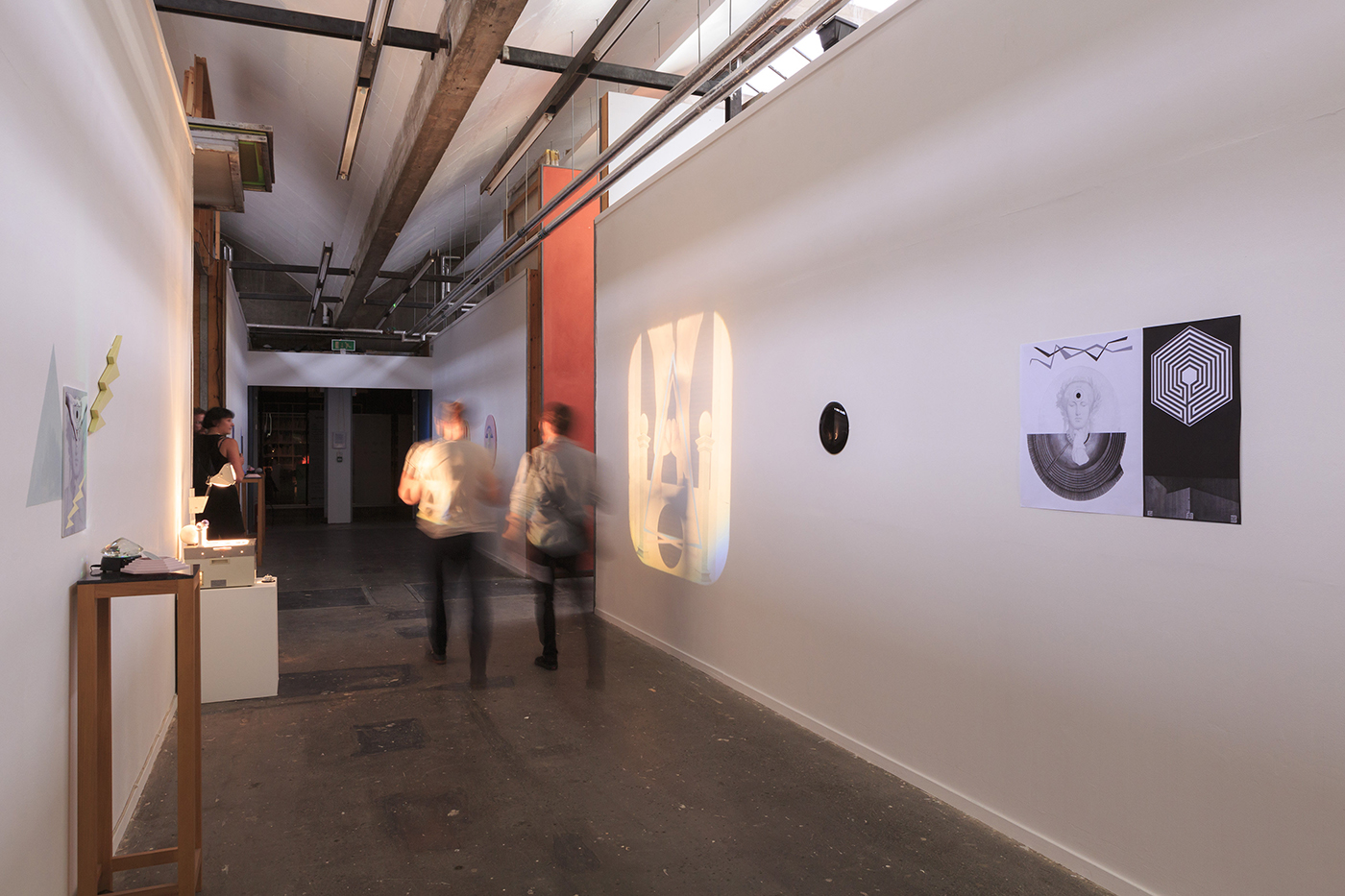 Passing through the mother hole

A relatively marginalised space in a number of senses of the word, Test Space at Spike Island sits in an odd position within Bristol’s contemporary art scene. Essentially a corridor adjoining a couple of different pockets of studios within the building (also requiring both a request and a guide to see the exhibited work outside of the opening nights), Test Space appears an uncomfortable space to present work. Certain things work within it, and others do not (e.g. large skylights make any projected work a challenge). If inclined towards giving the benefit of the doubt, you could potentially argue it’s a good use of small means.

This aside, Hayley Lock’s show, Passing through the mother hole, at Test Space, is a testament to its modest potential, bringing smaller presentations of work into the city - that ever important part of feeding a city’s culture. This show was my first experience of Lock’s work, an enjoyably fresh insight. American Indian imagery, Art Deco designs, neo-classical sculpture collages, references to the third-eye, glyphs that look vaguely like abstracted graphs, all set in that, currently, ever-pervasive colour palette: Pastel. The paintings immediately stood out, if not quite as precisely executed as I would have liked, they are playful, almost comical compositions of geometric shapes recalling multifarious symbology, rendered in ice cream flavour colours, cartoon-like in their symmetric unreality.

The writer Carlos Castenada’s fall from grace as an ‘authentic’ source of knowledge on an obscure tradition of South American Shamanism he named ‘Toltec’, is referenced in the press release, and coupled with Lock’s claim about her susceptibility to hypnotism, there emerges (at least in the contextual constellation the show proposes) a notion of doubt, a kind of spiritual placebo. This odd note of cynicism, or, at least, interest in the persuasive powers of spiritual doctrines and our own emotional desires for them, sits askant to the work within the show for me, the underlying need for purpose and externally defined direction absent from the works. Critics (in particular from the field of anthropology) have argued Castenada’s teachings couldn’t possibly be real, their general arguments being contradictory, and I was struck by how this could play out within the work. For example, at times the paintings feel slightly anachronistic, and perhaps this is quite precisely the point, for the work to have enough of a sense of the familiar by borrowing from traditions to make just the right signals for you to almost believe. I think the difficulty (though, in equal measures, this could also be its strength), is that the work seems by no means obviously skeptical itself, and though Lock talks about her susceptibility to hypnotism, the work feels sincere. 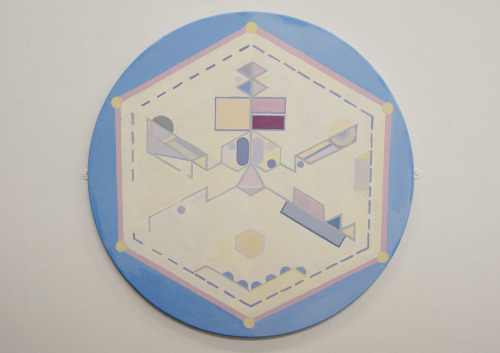 In a way, the pastel palette acts as a kind of packaging, a reassuring gift-wrap for this message of spiritual transcendence, a nice rejoinder to the incessant blackness a lot of recent occult-tinged work has been bathed in. It is also enjoyably modest in its means. One work uses a classic OHP, with crystals on it’s surface, to project an image of a neo-classical gateway, with enlarged human hands seemingly holding the disparate parts of the image together. In another two works, slowly revolving LED lit crystals sit on what looks like kitchen-counter granite with speckled silver sparkles in its surface, on top of an unpainted plinth. An affably coltish DIY mysticism runs through a lot of the work in the show. 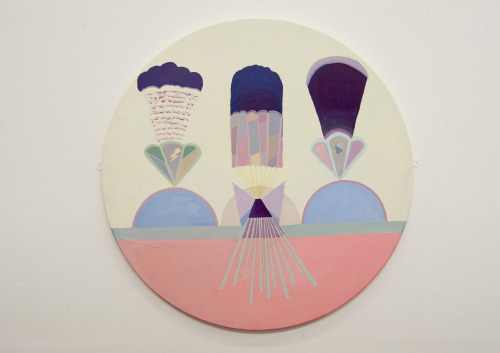 The paper printed collages, on reflection, somehow work the least. They almost feel too serious for the general mood of the show, their black and white tones sitting at odds with the pools of sweet colours and light in the rest of the show. They’re also smaller (A4ish) than anything else in the show, and their proximity to everything else in the space makes them feel too minor to be noticed, though perhaps in a larger exhibition space - where more space could be given over to them - this might not have felt so jarring. 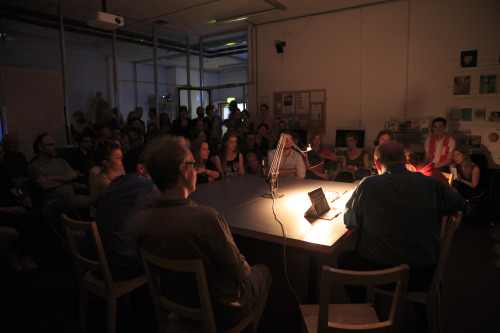 In some respects what niggles I have with the show are possibly quite specifically personal. I have my own interests in mysticism and occult practices, and in particular Chaos Magic’s ethos of constructing your own traditions, your own Gods, your own rituals to suit your needs, and so to me I was predisposed to read the work as perfectly sincere and plausible in its methods and endeavour…perhaps thus displaying my own susceptibility! 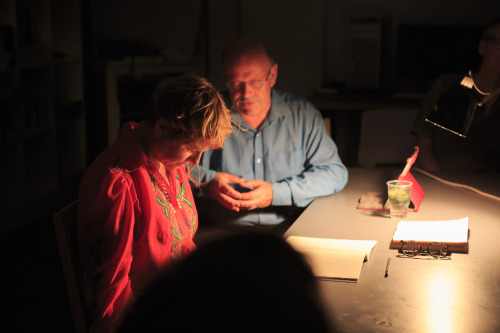 I deeply regret missing the opening nights performance, where Lock went under hypnosis in “an attempt to chase the infamous Castenada once more”. I can imagine from the clip provided on Lock’s website the depth this addition would have added to the work’s constellation, filtering in an odd mood with this sense of vulnerability, suggestibility, and potential exploitation that skirts the edge of hypnotism. This in turn pervades the placement of a wall-mounted circular, convex black-mirror in the exhibition, recalling John Dee’s own obsidian mirror, used to communicate with spirits who in turn supposedly relayed the particular practices and beliefs to Dee and his medium, Edward Kelly, becoming the main source for the Enochian magical system, continued by Crowley and the like. This potential for an entire, precisely structured, tradition to be based on a dubitable source of knowledge, not to mention the long-winded transmission from spirit to mirror to medium to magician, is, at best, utterly comedic. What this clip does in this context, is slightly unhinge the work, displacing the artist as master-author, at sea both with the whims of the artist’s unconscious, and with the ‘assistance’ of the hypnotiser, but at the last retaining a degree of control through this awareness of the mechanics of the process, and a desire for its results: access to the depths we either possess, or are possessed by.