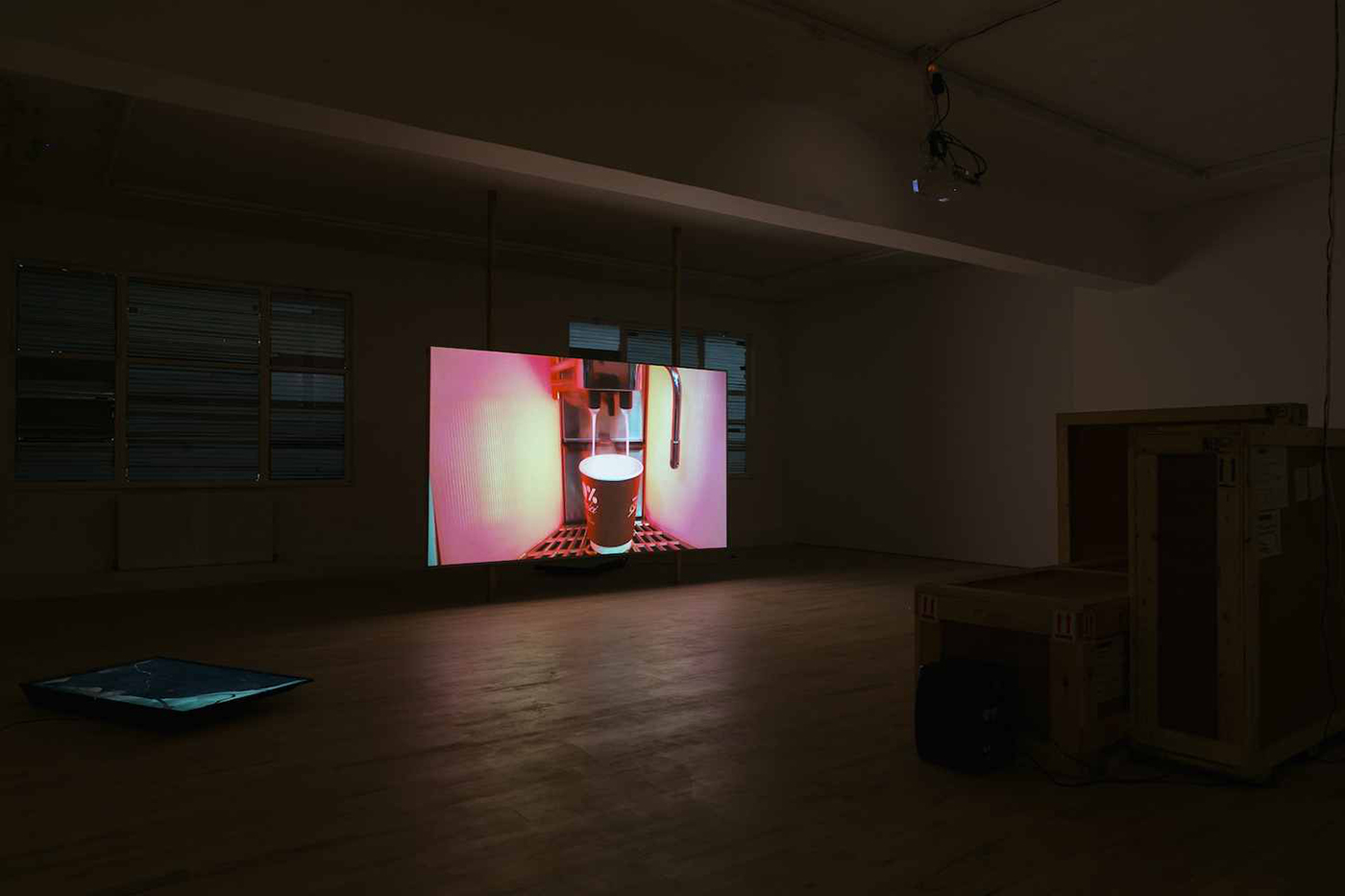 The Sunday Painter, Peckham recently made the switch to commercial having operated the space as an artist led project for the past four years. Still integral to their programming is the support for young and emerging artists and curators. I’m interested to see how the new refurb to accompany this transition affects the space, but upon arriving at Rob Chavasse’s Earth Wire I realise now’s not the time, as the majority of the natural light has been blacked out to enhance what is a predominantly video-based exhibition.

Before entering the darkened room, you’re greeted by a pair of wall-mounted fans, one pumping hot air, the other cool, dripping into a bucket beneath. Standing between the opposite air currents is a pretty horrible sensation; an artificial rush of blood, combined with a fever, simulated. But from a distance, the simplicity of the intervention - in this case using household appliances in an irrational arrangement, to create a kind of magic, a deft touch -resonates with the ideas recurrent in the show; a sublime semblance of banalities, made comic and melancholic, leaving you dangling – where were those fleeting moments buried?

Earth Wire, a 15 min video projection and central focus to the exhibition, opens with a close observation of a cheap, coin operated machine producing a cup of instant coffee, continuing the references to hot and cold proximities (the coffee and milk) and commonplace electrical goods. Following images of a globe spinning unnecessarily fast, and a pair of potted plants perpetually rotating within the vitrines of a revolving door create a kind of empathetic relationship with one another and toward the artifice of these generic environments, revealing an unexpected alchemy in their ability to attain a spirit of the underdog; the ordinary objects appearing to exceed beyond function and consequently enchant. The work is never self-effacing however, I never had the impression Chavasse is attempting to draw a focus or have the viewer assume an empathetic relationship toward himself. 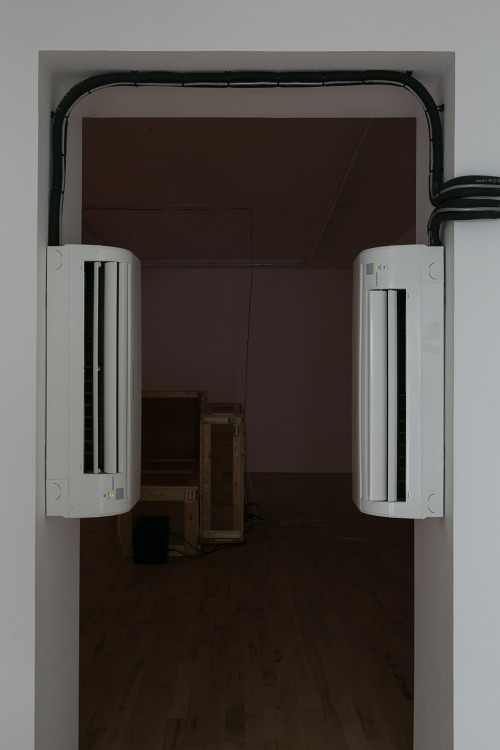 The content for the most part is comprised of these chance-encounters, or hasty moments of stimulus in and around urban and rural environments, accompanied by brief rises of minimal synth-based dance scores. A boy sits on the roof of a bus stop. A seagull flies adjacent to a ferry’s window. Raindrops on a car’s windscreen blur the rear red light emanating from the car in front. Are a lot of these encounters derivative of travel? This seemingly passive or uncritical stance, at least in the capturing of the footage, is what gives the work a profound sense of modesty. The practicalities of small recording devices are made evident in the film – the ebullience in briefly watching a lamb cause concern amongst its flock, as it appears to have temporarily got its head stuck in a bucket, emphasises a reflexive immediacy to the things around you. The comic nuances are extended to the office space at The Sunday Painter, easily missed if not paying attention to the list of works, where a pair of portable telephones sit on the desk crudely carved out of charred oak. This wry absurdity keeps the work from tipping over into feigned candour.

If liquid can be used as an analogy of transience, then Earth Wire both washes over and drips acutely with amorphous ideas of longing, belonging and passing through, observing your environment in an attempt to extract purpose, fulfill desire, or create meaning from our lived experiences, regardless of politics, class, if you’re an artist or not, just plainly being somewhere, thinking. It’s far from Steyerl’s use of liquidity, but there is a faint echo of earlier James Richards’ works, not so much a surface inquiry of penetration or tension with liquid, but more in its construction of sound and image and the rhythm between the two.

Watching on repeat, two scenes from Earth Wire got me most excited, leaving a sustained intrigue beyond leaving the show. The first is a short selection of shots of bumper-car supervisors, and the most edited sequence in the film. Sychronised to the rhythm of a gradually building, reverb-drenched techno track, the young men parade the court of the fairground ride, hitching on the backs of the cars, pertaining a great deal of elegance through their nimble footwork and swaying arms. There’s an obvious degree of posturing going on, but this bravura is both elevated and diminished by the pacey back and forth edits, as you observe these men harmlessly mimic a type of boy-racer adolescence. I think again to the role of the underdog in the show. It’s also hard not to think of Leckey’s Fiorucci Made Me Hardcore, considering the subcultural ontology between music, identity and style. The scene feels dated, or familiar, which might be due to a recurring slippage recently within contemporary art between images from the mid 90’s and now. Here though I question if we have come full circle, a post post-internet and looking again at Fiorucci without an ounce of irony?

The other scene and climax toward the end of the film sites the work from the perspective of the artist, a voyeur in a generic underpass, appearing to arrive via bike in the dark, and edited as a sequence of shots suggestive of the morning after, having camped out overnight. Attention is focused on a grey wall, covering you assume past graffiti, which, in turn, Chavasse continues to paint over once more, this time in a clear gloss. I again continue to think of the underdog sentiment, transferring effort (atagonised by the lo-fi painter-decorator implements; a small paintbrush and plastic cup) for seemingly little reward. What is revealed though, through subsequent sgraffito is the phrase LIFE IS NOW, smashing home a young freneticism within the domain of ‘anti-social’ exultation and the vernacular of pseudo-life mottos YOLO or other aspirational acronyms I don’t use. It brings a smile to my face. 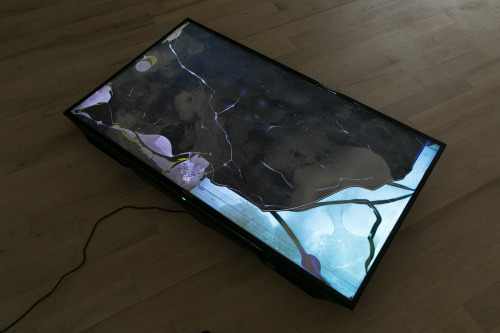 I am less concerned with the arrangement of floor LCD monitors, their short looped videos distorted by fractured screens or limescale growth. They feel like a more common address of ideas around hyperreal fission. Within the film and exhibition as a whole however, elements are at play here, as are the senses, but done in a non-phenomological, dead-pan manner. The film comes full-circle, as it draws to a close with scenes of a frozen footpath, hot to cold, liquid to air, solid and back again. It is poetical, much of Chavasse’s previous work I’ve seen is, but poetic in the ease of pairing, or depiction of, functional objects: fans, heaters, lights, beyond the parameters of expectancy and into the realm of absurd. There’s often a trick, Chavasse is the maverick that refuses to grow up, or never wishes to forget what youthfulness is, and this is questioned with a kind of drollery, but produced with what feels like absolute sincerity, and so unexpectedly joyful.