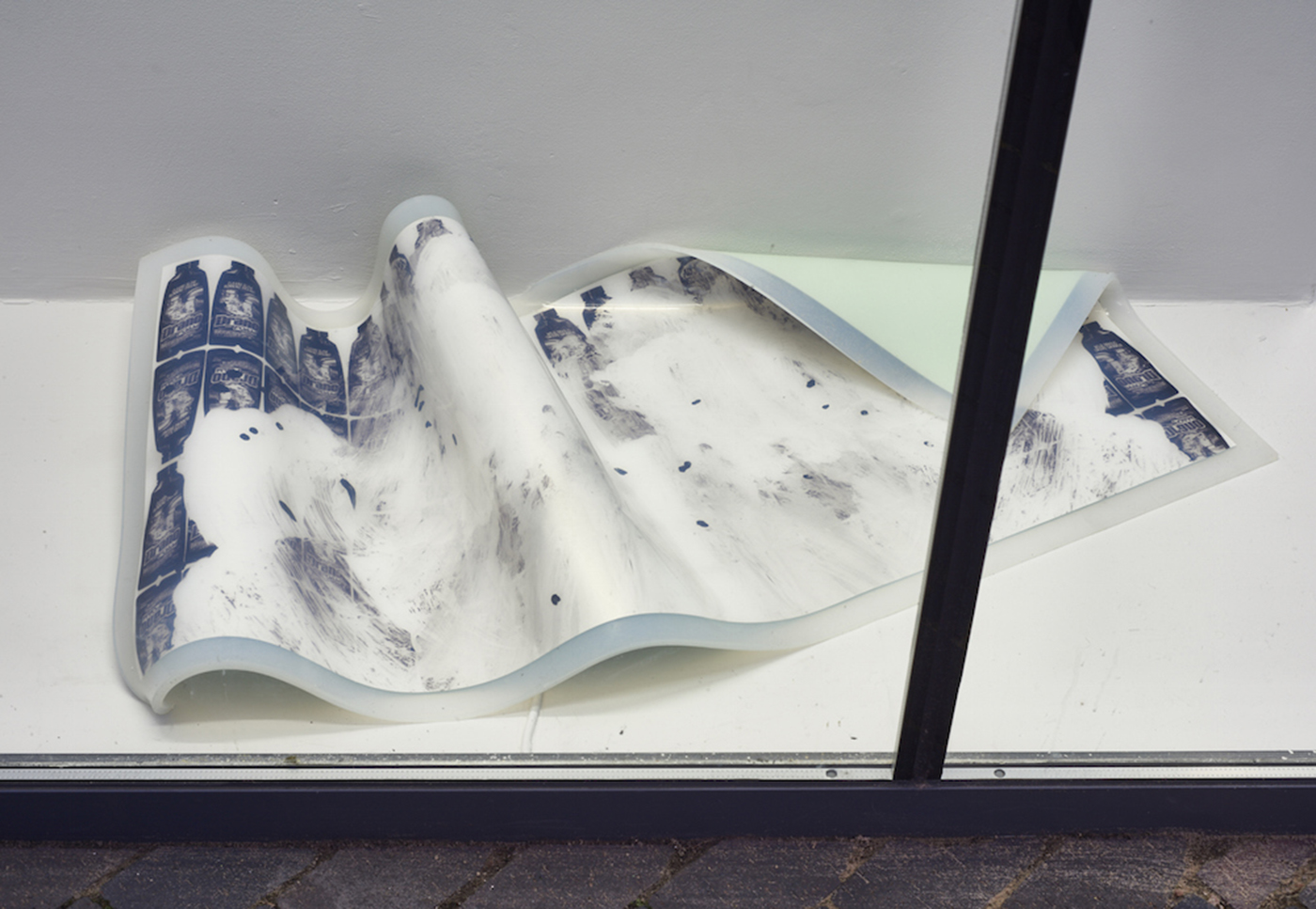 ‘Gate-shut-panic’, the literal translation of Torschlusspanik, originates from a Medieval expression that describes the closing of the city gates at nightfall, and the anxiety leaden in the peasants who must be back within the protected confines of civility, else be vulnerable to the wild; feral animals, the cold, the vagrants.

The press release invokes an obsolete-feudalism to correlate with modern phenomena, noting the metaphorical equivalent to a mid-life crisis. What strikes is the transformation from the collective fear conditioned by the exposure to unregulated land, to an individual experience of panic, systemic of wider socio-economic conventionality; an existential revealing of an up-till-now numbness of the self.

So considering Torschlusspanik at VITRINE gallery, Charlie Godet Thomas’s installation posits the viewer as the victim of poor time-keeping, given the format of viewing the work being permitted only to the outside of the vitrine, and Bermondsey Square serving as proxy to the area where the audience - (looker, onlooker?) can observe the work. The square being mostly void of the feral, we can at least enjoy the time outside to view a group of new works spanning across a medium of objects, print and architectural structures, given that these ‘city-gates’ are made of glass.

In the previous works I’ve seen by Godet Thomas, there has been an intertextual friction between text and object, whether the text be present, had presence, or suggestive of something all together disparate in the titling of the work. In one work, I remember the distinguishable yellowiness emitted from a pack of cast rubber lemons as the plastic bag they sat within absorbed the light from their fluorescent pigment. Left on the end of a bench, the pedestrian setup was made weird by the title, Evil Knievel Died of Natural Causes. Yes he did. Is it an obituary one might find in the daily newspaper, a nod toward a bittersweet death, or catalyst for the ones about to go through their own torschlusspanik? The profundity of life made manifest in a bag of lemons.

At VITRINE, Godet Thomas’s exhibition operates in a similar manner; trivial and commonplace products of modern living are ontologically and culturally skewed, this time by an exhibition title rooted in an historical myth from the Middle Ages. Due to this dislocation in time and place, the group of different works are each an anachronism to their common signifier. Walking sticks populate the space, though lack their rigidity and supportive purpose, and take on a cartoonish quality. Though kept neutral and uniform in their design, each harbour their own exhausted presence, coiled up on the floor or suspended limply from the ‘architectural’ beams. ‘All Doled up with Nowhere to go’, the title of each walking stick is a darkly humorous reflection on regret; time is passing, and the physicality of the structures around you - friendships, relationships – are becoming more and more immaterial. 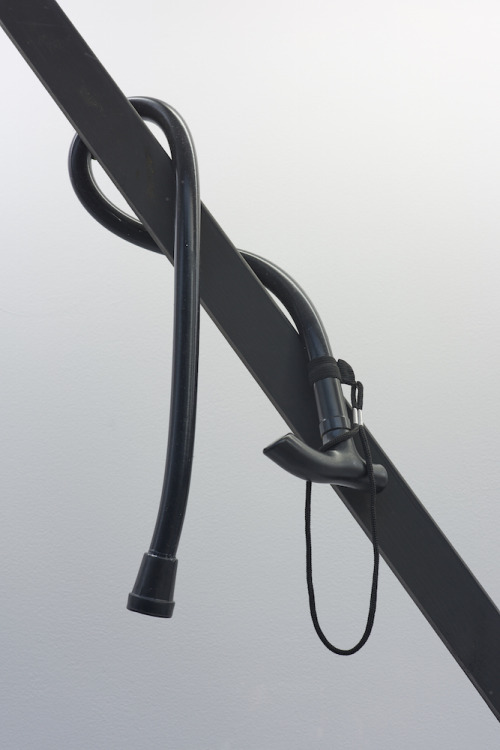 Wall-mounted display panels running the length of the space are left vacant, and their emptiness is made apparent by the creased and folded rubber ‘posters’ that now lay on the floor below. Warholian in their design and motifs, the posters (Scratching Each Other’s Backs, Like Cans in a Sack (Drano), Anchors up (Drano), Now it’s Tomorrow, As Usual (Drano)), lay bruised on the floor, the displacement of time evident in the demise of the image, now void of colour, a blurred resolution and smudginess, erased. Here, Pop Art is a lost hope, the repetition of the image taking on qualities more akin to Ancient Hieroglyphs than post-war consumerism; artefacts of a forgotten age, devoid of Pop’s utopian intent of critique. The recurring motif depicts a bottle of Drano, a drain cleaning agent, and with the repartee of the titles, offers the viewer the first hint toward a way in beyond the gates, via a riddle of word associations.

The press release talks of the artist’s presence, or recent absence from the space – but I felt these works to inhabit an autonomous energy in themselves. The quotidian objects that surround us, products to enhance our drainage systems, ergonomically standardised walking sticks, display mechanisms like posters, all these things invoke a kind of bewitching fatigue, but they’ve danced long enough for us. Now we’re in a period of stasis, and whilst there’s an ambition to continue moving, one can’t keep up with time, nor the ground that sucks everything under. Our energy is sapped, we’re down the pan, Drano, this is draining.

The wooden beams, painted black, are fitted from ceiling to floor over the length of the space, positioned in a diagonally downward formation. The presence of this structure, though purposeless in its architectural redolence, like the walking sticks, are an adornment to the space, looking at once like the pinnacles of typical Gothic architecture, undoubtedly due to the Middle Ages reference again, but also a literal rhythm of life’s experiences. ‘Up Down / High Low / Peak Trough’ - times of happiness, times of depression, the trough, channelling liquid, pour down the Drano, a point of low activity or achievement. 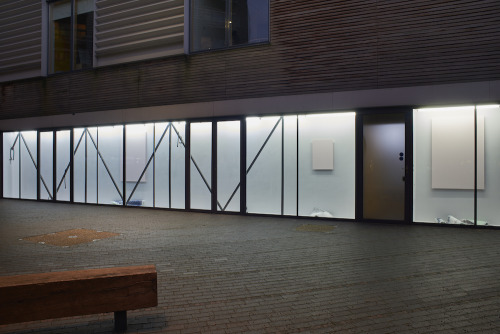 Torschlusspanik is quite a cold experience. Things are tumbling, and are getting wobbly - there’s a lack of stability. The works acknowledge the physical assertion of time when left without intervention, though the melancholic sentiment of a mid-life crisis and death (the act of consuming Drano features in Kurt Vonnegut’s novels as a method of suicide for several of his characters), is delivered in a comical manner to dispel any sense of morose reverie. I sense a quick-jab sardonicism when looking at the work, yet a more gradual complexity emerges when given the time and insight to the artist’s use of language. This is what is most enjoyable in Godet Thomas’s practice - the play and the pun, exploring poetry as a form and medium, and choosing when to formalise this in language, either through a process of paronomasia, (to name) or imply, through mimesis and banter.